A top Hillary Clinton adviser went on Fox and talked about how she could run in 2020. 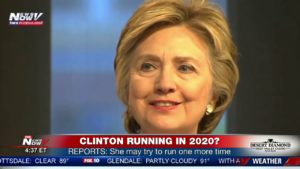 There are few staffers who have been with Hillary Clinton as long — or are as fiercely loyal to her — as Philippe Reines.Which is why Reines’ appearance on Tucker Carlson’s(!) show on Fox News Wednesday night to keep the door open to a late entry by Clinton into the 2020 race(!) caught my eye.

Here’s the key bit from Reines:

”This is a huge if. But if she were jump in for whatever reason, and the party has moved someplace that she hasn’t, then she won’t get the votes. That’s the point of the primary. There are still 19 people. There are a few that are in double digits. If she were to run, and people [say] she’s too left, too right, too center, that’s the beauty of it. They get to vote against whatever they want….

“She’s not running because she has any anxiety about the Democratic field. She really likes a lot of the people running. She knows them well. She thought about some of them for her vice presidency. But there might be a reason that she would be the best person, not only to beat Donald Trump, but to govern after Donald Trump.”

Far from closing the door on the recent speculation that Clinton might be the answer to establishment Democrats’ increasing jitters about the strength of their field, Reines kicked the door wide open with those comments.

Sure, he blanketed all of the speculation with the “this is a huge ‘if'” line. But he has been around politics and media long enough to know that what he was saying would add credence to the rumors that Clinton might well be interested in a third run for the White House.

Think about it this way: If Reines had wanted to, he could have simply said: No, she isn’t running. She thinks she would be a good president — and a far better one than Donald Trump — but her time as a candidate has passed.

Or, even easier: Don’t agree to go on TV to speculate openly about the possibility of her running.