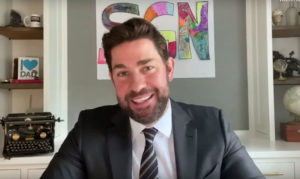 At a time when bad news is 24/7, some celebs like John Krasinski (The Quiet Place, The Office) are putting together uplifting compilations of everyday people doing good. It’s inspiring.

On the flip side, with a simple swipe down through social media, you can see other celebrities like the ones Joe Rogan called out as “knuckleheads” putting on a show.

We get it, you’re celebrities and like having an audience, but singing John Lennon’s ‘Imagine’ to uplift and unite people during the coronavirus pandemic shows how out of touch some are.

Gal Gadot (Wonder Woman) said she was inspired by someone playing ‘Imagine’ on a trumpet in Italy. Keywords, “playing” and “trumpet” — no lyrics involved.

Singing the lyrics ‘Imagine there’s no heaven’ is like throwing gasoline on a fire at a time when people are dying in isolation away from loved ones. Top it off with ‘Imagine no possessions,’ which is what most Americans are scared of right now, repo-men taking everything from them after losing jobs because of the lockdown.

The actress wrote in the post accompanying the video, “we are all in this together, we will get through this together. Let’s imagine together. Sing with us. All love to you, from me and my dear friends.” Her friends in the video include Will Ferrell, Natalie Portman, Jimmy Fallon, Zoe Kravitz, Amy Adams, Mark Ruffalo, James Marsden, Sarah Silverman, and Maya Rudolph.

Honestly, Gadot and Co. couldn’t pick a worse song if they tried.

What’s worse is that Gadot seemed flirtatious in the video. If that is how the actress is naturally, wow. If not, being seductive at this horrifying time, in a video that’s meant to unite is scarily out of touch with reality.

Stand-up comedian Joe Rogan slammed the video during his podcast, saying “she’s got this beautiful smile on her face, and so happy to sing that, just like she’s seducing you.” His guest on the show, Tom Segura replied “there’s this sense that they feel like they did something significant. I lost my job at the meatpacking plant, but Gal Gadot sang ‘Imagine.'”

Unbelievably, Gadot and Co. aren’t the worse cringe-worthy celebs. Madonna took it to a whole new level with a bizarre nude monologue in her bathtub. ‘Imagine’ doesn’t seem so bad now after all.

If celebs want to help they should donate money like James McAvoy. The X-Men star gave $340,000 to the UK Health Service so that they could buy more protective gear during this pandemic. If they can’t give money, then follow the John Krasinski method. Shine the spotlight on everyday people doing great deeds.

Krasinski’s show is called Some Good News and is nothing more than the actor covering stories that have been shared online. It’s simple, low budget, but effective. Since launching on YouTube, March 29th, nearly 11 million people have watched.

This positive spin isn’t personal opinion, the comments on YouTube for each video back up this articles sentiment.

The feedback for Krasinski’s news show is overwhelmingly positive. Comments like “I was not ready for this overload of positive emotions. the old man singing to his wife broke me…can’t lie” and “when the coronavirus is over this needs to become a real TV show” are the norm.

In comparison, the comments Gadot’s video received on YouTube are mostly sarcastic and dismissive. Comments range from “wow celebrities really stopped the corona with this one!” and “in their self absorbed narcissistic minds this was A GIFT TO THE WORLD.”

For us, watching someone selfless is inspirational. Watching celebrities sing, dance, or monologue isn’t. Make your own mind up.