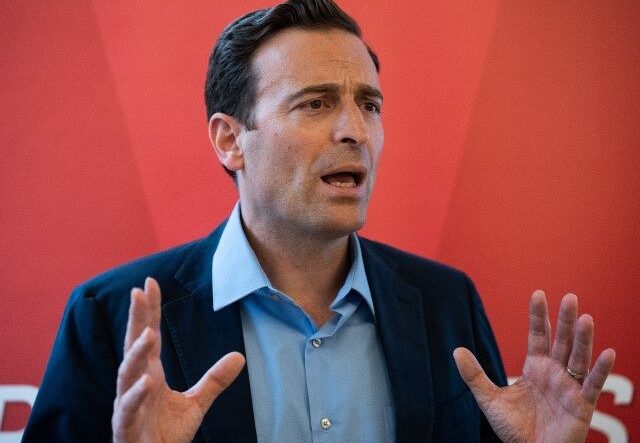 Sharing a Breitbart News article on Twitter about Cortez Masto and her husband’s ties to Hunter and his shady business, Laxalt suggested Cortez Masto may be “trying to shy away from the Biden family” despite her family’s “long history with them.”

“.@CortezMasto’s husband would solicit work from his “buddy” Hunter Biden to provide security for the Biden campaign,” Laxalt tweeted. “She might be trying to shy away from the Biden family in an election year but make no mistake, her family has a long history with them.”

Breitbart News first reported that President Joe Biden’s 2020 campaign paid a private security firm owned by Cortez Masto’s husband, Paul Masto, who was friends with Hunter and asked for work from the Biden family while Joe Biden was vice president.

Emails on Hunter’s laptop from 2010 reveal he and Paul Masto have been friends and even discussed Masto’s security company. In Paul Masto’s email to Hunter, he called Hunter his “buddy” and asked if Hunter knew anyone who needed his security services.

Cortez Masto’s husband has a noteworthy background. He is a former assistant special agent in the Secret Services office in Las Vegas. From 2007 to 2020, Paul Masto owned the private security company, Universal Security Specialists, before it was dissolved in 2020 when Joe Biden become president-elect.

Breitbart News reported that from 2019 to 2020, Universal Security Specialists received its only income from Biden For President, totaling over $24,000, according to FEC filings.

Then in fiscal year 2022, Paul Masto was awarded about $27,000 worth of pandemic rental income, Breitbart News reported. Paul Masto’s receipt of pandemic funds raises questions of whether a United States senator’s family member should be able to cash in while a spouse is designing federal policy.

The Mastos’ close ties to the Biden family come to light as Hunter is reportedly being investigated by Trump-appointed United States prosecutor David Weiss for tax fraud and money laundering. Meanwhile, the FBI has reportedly blocked an investigation into Hunter’s laptop, which raises questions about the scope of Weiss’s investigation.

In this Wednesday, Dec. 4, 2013 file photo, then-Vice President Joe Biden waves as he walks out of Air Force Two with his granddaughter Finnegan Biden and son Hunter Biden at the airport in Beijing, China. (Ng Han Guan, Pool/AP)

“Ranking Member James Comer and Oversight Committee Republicans are investigating the Biden family’s suspicious business dealings and influence peddling, as well as Big Tech and the Swamp’s collusion to hide incriminating information about the Biden family,” the aide said.

“I think it can be done over oversight. There’s plenty there [to investigate],” Mace told Breitbart News. “But if that is not enough, once the traditional committee process investigates – then by all means – a special committee would be another option, absolutely.”

“We know who the ‘big guy’ is who is getting a cut,” she added, referring to Joe Biden. “I think no matter what, whether it’s going to be a special committee or via oversight, there is going to be a role for Congress in particular on vetting out corruption.”

Hunter Biden is the subject of a brand new narrative film, My Son Hunter, marking Breitbart’s expansion into film distribution. The film was directed by Robert Davi (Goonies, License to Kill, Die Hard) and stars Laurence Fox (Victoria, Inspector Lewis, The Professor, and The Madman) as Hunter Biden; Gina Carano (The Mandalorian, Dead Pool, Heist) as a Secret Service agent; and John James (Dynasty) as Joe Biden. It was produced by Phelim McAleer and Ann McElhinney (Gosnell movie, FBI Lovebirds: Undercovers) from the Unreported Story Society. The film is available RIGHT NOW for Streaming and Downloading at MySonHunter.com. The trailer below has been viewed almost 5 million times across social media.

The Ann and Phelim Scoop