AG Barr: DOJ has followed up on credible claims of voter fraud, has not yet found fraud on scale that could change election results 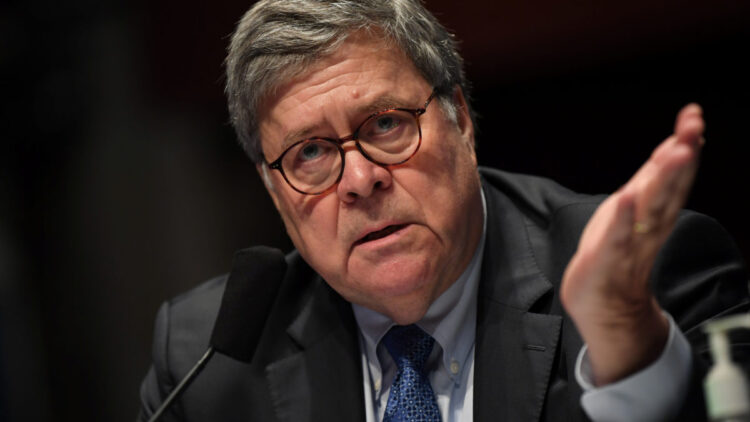 Attorney General Bill Barr told the Associated Press Tuesday that the United States Department of Justice has not found any evidence of widespread voter fraud that would change the outcome of the 2020 presidential election. POLL: What are you most worried about?

Barr said that U.S. attorneys and FBI agents have investigated specific complaints and information they’ve received and that the investigations have not unearthed evidence that the outcome of the election was fraudulent.

“To date, we have not seen fraud on a scale that could have affected a different outcome in the election,” Barr said.

On Nov. 9, the attorney general authorized federal prosecutors to look into “substantial allegations” of voter fraud while advising federal investigators to disregard “specious, speculative, fanciful or far-fetched claims.” Barr has been a consistent critic of mail-in voting, warning before the election that widespread mail voting created opportunities for election fraud.

In the wake of the election, President Donald Trump and his lawyers have asserted that a “national conspiracy” of voter fraud took place and that former Vice President Joe Biden’s victory in several key battleground states was illegitimate. The president has refused to concede to Biden as his campaign pursues various legal challenges to the results of the election. Additionally, lawmakers in several states have begun conducting election integrity hearings to listen to testimony from witnesses who say they have proof of voting irregularities that amount to widespread fraud.

Some of the Trump campaign’s legal filings have been rejected by judges who found that the evidence presented by Trump’s lawyers was not sufficient to substantiate their claims — including Republican-appointed federal judges. Lawsuits by Trump or state Republicans seeking to block the certification of election results in three different states were dropped or lost this week.

Barr did not address many of the specific allegations made by Trump’s legal team, but he did say that the DOJ has investigated claims that Dominion Voting Systems machines were somehow hacked or manipulated to throw the election to Biden, finding no evidence this happened.

“There’s been one assertion that would be systemic fraud and that would be the claim that machines were programmed essentially to skew the election results. And the DHS and DOJ have looked into that, and so far, we haven’t seen anything to substantiate that,” Barr said.

He added that many people are demanding that the federal criminal justice system investigate allegations that are outside of its jurisdiction and belong in civil lawsuits. He suggested that conducting state audits of election results is the appropriate response to many of these allegations of voting irregularities, rather than criminal investigations by the federal government. Amid allegations of voting irregularities, an audit of the Georgia election results confirmed a Biden victory and produced no indication that widespread fraud took place.

“There’s a growing tendency to use the criminal justice system as sort of a default fix-all, and people don’t like something they want the Department of Justice to come in and ‘investigate,'” Barr said.

He noted that criminal investigators require a basis to believe a crime took place before they can launch an investigation. Those allegations that meet that requirement, Barr said, have been followed up on.

“Most claims of fraud are very particularized to a particular set of circumstances or actors or conduct. They are not systemic allegations. And those have been run down; they are being run down,” Barr said. “Some have been broad and potentially cover a few thousand votes. They have been followed up on.”

The Trump legal team led by Giuliani and campaign senior legal adviser Jenna Ellis issued a statement responding to Barr, accusing the Department of Justice of lacking “any semblance of an investigation.”

“With the greatest respect to the attorney general, his opinion appears to be without any knowledge or investigation of the substantial irregularities and evidence of systemic fraud,” Trump’s lawyers said.

Later Tuesday, a spokesperson for the Department of Justice issued a statement criticizing media reporting of Barr’s remarks and clarifying that the attorney general did not announce a conclusive finding of no evidence of fraud in the election.

“Some media outlets have incorrectly reported that the Department has concluded its investigation of election fraud and announced an affirmative finding of no fraud in the election. That is not what the Associated Press reported nor what the Attorney General stated. The Department will continue to receive and vigorously pursue all specific and credible allegations of fraud as expeditiously as possible,” the spokesman said.