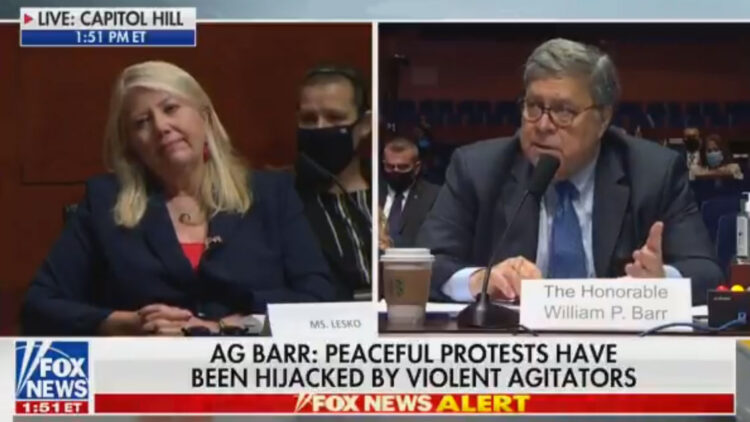 Check out the full hearing below or swipe down to see the highlights.

CHECK OUT: Watch an armed protester shoot at jeep driving through an illegal blockade, accidentally shooting fellow protesters in the process.

During the hearing AG. Barr stated that these groups had hijacked protests that had started because of the murder of George Floyd.

Those protests were a legitimate cry for justice, but more than 50 days in and countless violent riots later, they can now only be described as an assault on the United States.

He said: “In the wake of George Floyd’s death, violent rioters and anarchists have hijacked legitimate protests to wreak senseless havoc and destruction on innocent victims.”

For Violent Riots, Portland Is The Example

The attorney general picked out Portland, Oregon as his example.

AG. Barr said: “Every night for the past two months, a mob of hundreds of rioters has laid siege to the federal courthouse and other nearby federal property.”

The Attorney General continued: “The rioters have come equipped for a fight, armed with powerful slingshots, tasers, sledgehammers, saws, knives, rifles, and explosive devices. Inside the courthouse are a relatively small number of federal law enforcement personnel charged with a defensive mission: to protect the courthouse.”

CHECK OUT: Watch AK-47 armed Black Lives Matter protester shot dead by a driver during a confrontation in Austin, Texas.

The AG. concluded: “What unfolds nightly around the courthouse cannot reasonably be called a protest; it is, by any objective measure, an assault on the government of the United States.”

Attorney General William Barr then hit the Democrats with a damning fact. He said: “Every member of this committee, regardless of your political views or your feelings about the Trump administration should condemn violence against federal officers and the destruction of federal property.”

CHECK OUT: Democrats are spreading an election 2020 conspiracy that President Trump is sending federal forces to cities tormented by anarchy so that if he loses the vote he can take control by force.

Just in case any of the Democrats at the House hearing missed what he had said about Portland, AG. Barr had prepared remarks about additional Courthouse events. Ensuring no one could doubt the legitimacy of his questioning.

AG. Barr said: “In recent nights, rioters have barricaded the front door of the courthouse, pried plywood off the windows with crowbars, and thrown commercial-grade fireworks into the building in an apparent attempt to burn it down with federal personnel inside.”

He continued: “The rioters have started fires outside the building, and then systematically attacked federal law enforcement officers who attempt to put them out — for example, by pelting the officers with rocks, frozen water bottles, cans of food, and balloons filled with fecal matter.

To support his words with evidence, if needed, AG. Barr said: “A recent video showed a mob enthusiastically beating a deputy U.S. marshal who was trying to protect the courthouse — a property of the United States government, funded by this Congress — from further destruction.”

The Attorney General added another damning fact and said: “A number of federal officers have been injured, including one severely burned by a mortar-style firework and three who have suffered serious eye injuries and may be permanently blind.”

And yet, Democrats remain in support of the anarchy, which everyone including the ignorant mainstream media, should now be calling out as domestic terrorism.

CHECK OUT: Out of the Top 20 Most Dangerous Cities in the United States, 18 are run by Democrats and the other two are run by independents.