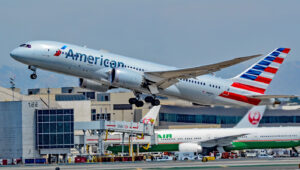 Despite airlines receiving a $25-billion bailout earlier in the COVID-19 pandemic, they’re still unable to follow social distancing rules. A fact that adds further insult to injury for small businesses that face ruin or punishments if they break executive order rules.

The latest to be caught flaunting social distancing rules is American Airlines. The video below shows passengers on a flight from San Juan, Puerto Rico to Miami. It’s clearly packed and the 6-feet rule isn’t being followed at all.

The lack of social distancing is bad, but American Airlines aren’t alone.

The real underlying issue with this, is that small businesses are being punished for not complying with social distancing rules while billion-dollar airlines are doing the same and not being penalized.

CHECK OUT: Governor suspends license of business owner who reopened on Mother’s Day.

Dr. Weiss wrote in another tweet: “We are about to land & I just wanted to say a few things. 1) people on this plane are scared/ shocked. 2) I have no idea why most of them are traveling. 3)I am with a group of 25 nurses and doctors who have been working in NYC hospitals for the past 2-4 weeks. We are coming home.”

Despite the masks, and the fact United Airlines provided this flight for free, the disregard for social distancing is obvious.

After this embarrassment, United Airlines announced they were offering people who don’t want to fly the option to rebook.

The tweet read: “Starting next week, customers on flights that are expected to be closer to full capacity can rebook on a different flight or receive a travel credit. We’ll do our best to reach out about 24 hours before departure and we’ll also provide options at the gate.”

So, flights will continue to ignore social distancing, but its up to the passenger to decide if they want to risk it.

Again, the issue here is why can airlines decide to follow this logic, when small businesses who want to reopen, and have patrons who want to attend be continuously punished?

In April, airlines took $25-billion from the Treasury Department because they faced bankruptcy as global travel almost immediately stopped as the pandemic spread.

The terms for the bailout was that airlines would keep 90-percent of workers through September, that one-third of the funds taken will be refunded, plus all stock buybacks and dividends would be suspended.

Airlines include American Airlines AAL, Delta, United, Southwest LUV and six-more were part of the bailout.

In all the discussions, it seems nothing was said about airlines following executive orders or the penalties they would face.

Regardless of what was agreed, airlines need to be penalized like small businesses or all people should be given the freedom to opt-out of executive orders at their own risk.

Right now, having one rule for one and a different rule for others is only adding more division to an already divided nation.

CHECK OUT: President Trump tells greedy businesses who took relief funds to pay it back or else.