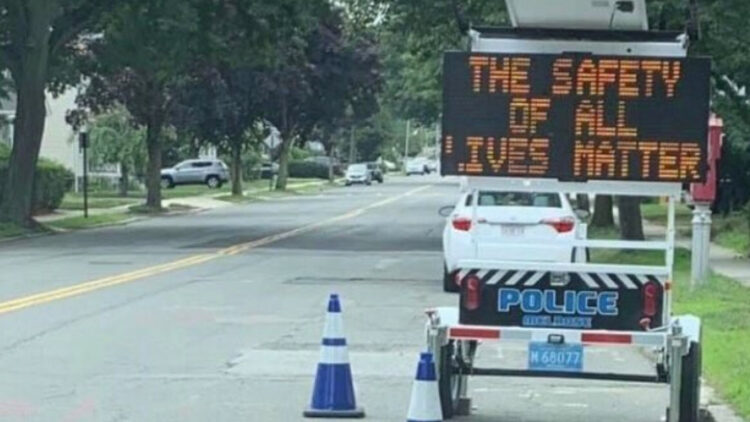 A Mayor launched into action Wednesday, July 9, to find the criminal mastermind behind a horrific digital road sign hate crime. The sign read: “The safety of all lives matter,” the shock, the horror, the outrage.

Mayor Paul Brodeur of Melrose Massachusetts, who upon being made aware of the hate speech jumped onto Twitter to make sure residents knew that action would be taken and that he was sorry.

Our only conclusion is that in Melrose, all lives don’t matter.

Well, the outrage not only reached the Mayor but the Melrose Police Chief Michael L. Lyle, who condemned the message in a statement specifically about the sign.

The statement read: “I am aware that the phrase ‘all lives matter’ is commonly used as a misguided counter to the Black Lives Matter movement. The sign was immediately changed and at the request of the Mayor, I launched an investigation, which is ongoing.”

A misguided counter would be White Lives Matter. All Lives Matter is as inclusive and non-divisive as you can get. It’s down the middle and fair for all.

Yet, we’re in an America where liberal social politics keeps putting labels on everything. So, congratulations liberals, you’ve segregated the country.

In the statement, the Chief then apologizes to Melrose residents: “On behalf of the Melrose Police Department, I sincerely apologize to our residents and anyone who drove past the sign today.”

So that’s the Melrose Mayor and Police Chief apologizing for a road sign that read All Lives Matter.

In the Chief’s statement, preliminary findings were included: “The officer reported to me that he did not post the message with either malicious or political intent. The officer, by his account, was trying to type a traffic safety message in the limited space offered by the electronic sign and did not realize the totality or impact of the words he had posted. Nonetheless, I will conduct a full and thorough investigation.”

If this wasn’t an election year, the officer’s words would have been acceptable. And why wouldn’t they be, all lives do matter.

Yet, liberals beg to differ.

One Twitter user wrote: “Thank you for your quick action Mayor Brodeur! This is hate speech, purely & simply. It does *not* belong in our community!”

Another user wrote: “Thank you! This is sick and sad and training is needed.”

And one final example of the liberal madness: “Wow. I hope the DPW staff will be getting some anti-racism training.”

If saying All Lives Matter is hate speech, sick, and racist now, where will the United States be in a decade?