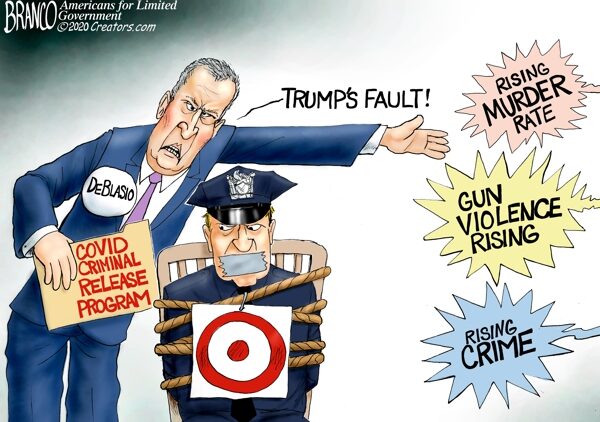 It doesn’t matter what you’re watching and what it’s for, the blame is always put on President Trump’s shoulders.

The best way to describe his almost-four years in office would be to compare it to a Rocky fight. He’s constantly being hit in the face by bigger, dumber, and unlikeable opposition. Yet he keeps getting back up.

His biggest foe, the mainstream media.

Their willingness to spin facts while giving Democrat voices a constant platform to throw jabs from has caused an unknown amount of damage to his reelection campaign. Yet, it’s not just on TV, but online via social media.

Some of the worst examples of media spin come from New York, where care home deaths and violent crimes dodged the Mayor and Governor to land at the feet of President Trump.

Check out political artist A.F. Branco take on this below, or you can find more at ComicallyIncorrect.com.

Comically Incorrect describes it as: “Under Mayor de Blasio’s leadership crime is way up after his COVID criminal release program and cutting the police budget.”

CHECK OUT: Congresswoman pushes President Trump 2020 Election conspiracy, saying that Portland is a trial run for what happens if he loses.

Comically Incorrect describes it as: “The Marxist-stream media continue to cover-up the truth with fake news and fake deflection.”

CHECK OUT: Did you know 18 out of the Top 20 Most Dangerous Cities in the United States are run by Democrats? The other two are run by independents.