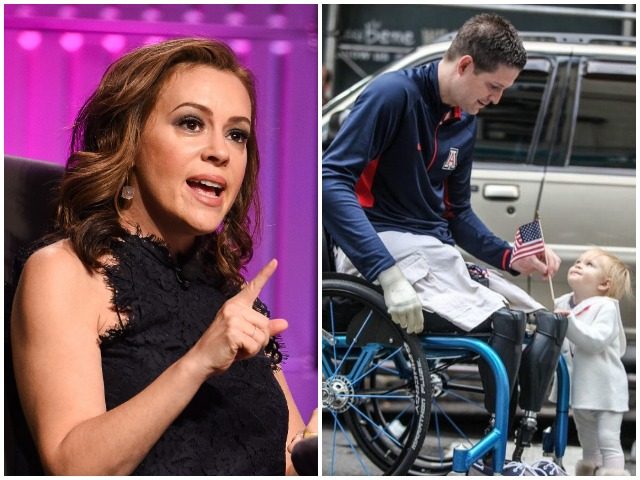 Left-wing Hollywood actress Alyssa Milano mocked the crowd funding campaign to build a border wall, started by a triple amputee Air Force veteran, arguing that the money could be used to take “care of our veterans.”

However, as others on social media pointed out, the founder of the crowd fund effort, Brian Kolfage, a veteran of the Air Force and was wounded in Iraq. He is a triple amputee due to his wartime wounds.

On the GoFundMe page, “We The People Will Fund The Wall,” Brian Kolfage explains:

Like a majority of those American citizens who voted to elect President Donald J Trump, we voted for him to Make America Great Again. President Trump’s main campaign promise was to BUILD THE WALL. And as he’s followed through on just about every promise so far, this wall project needs to be completed still.

As a veteran who has given so much, 3 limbs, I feel deeply invested to this nation to ensure future generations have everything we have today. Too many Americans have been murdered by illegal aliens and too many illegals are taking advantage of the United States taxpayers with no means of ever contributing to our society.

I have grandparents who immigrated to America legally, they did it the correct way and it’s time we uphold our laws, and get this wall BUILT!It’s up to Americans to help out and pitch in to get this project rolling.

So far, the project has raised over $11 million, and is seeking to raise $1 billion.