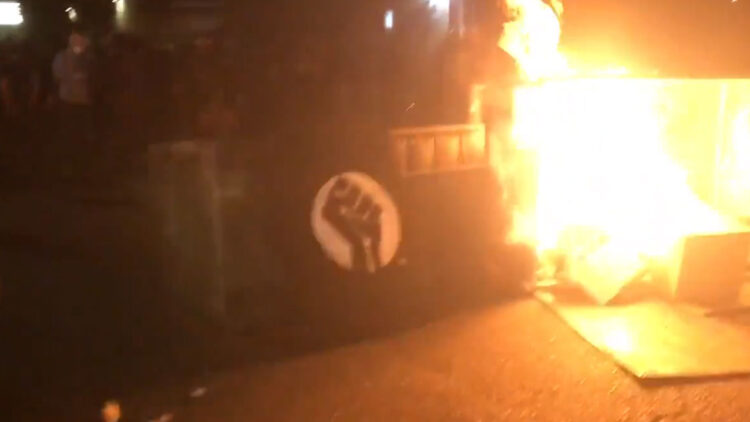 American riots continue under the guise of peaceful protests. With more violent destruction, arson, and in-fighting.

Trouble again spiraled in Portland as federal officers had to get involved, plus a fresh outbreak of anarchy spread through Seattle.

During the riot, a few genuine protesters attempted to keep it civil but failed. Fights broke out, with the anarchists overpowering them before returning to the courthouse.

Outside the courthouse, anarchists taunted people inside.

The trouble continued until officers arrived at around midnight. Where they allegedly used tear gas, pepper spray and other non-lethal munitions to disperse the crowds. During this time, barricades were removed and those trapped inside left.

Once the officers vacated the courthouse, anarchists returned to barricade the building.

CHECK OUT: Portland Mayor was offered help by Homeland Security, but he told them to help with graffiti instead of riots.

While the riots outside the courthouse were growing, a second riot spread to the city’s police union headquarters. It is reported that some demonstrators broke into the building and set fires, while others attempted to barricade the streets.

The Portland Police tweeted: “After vandalizing a police vehicle at North Precinct this large group made a 2-mile walk to N. Lombard near N. Campbell. The street is blocked. Avoid this area.”

They continued: “People have broken into the Portland Police Association office and lit the building on fire.”

The police later announced that: “Officers were able to put out the fire inside the PPA office and have restored order in the neighborhood there.”

One person on Twitter replied: “The last 50 times police have said “Protestors have vandalized/burnt down/thrown bricks at our stuff” in the last two months, it’s always been shown it was actually the cops who did it so they’d have something to blame protestors for.”

This is the level of insanity some have fallen to when supporting these American riots.

CHECK OUT: Watch an Antifa punk get slammed to the ground after he messes with the wrong person’s car.

The Seattle Police Department stated: “Demonstrators went from Westlake Park to the Municipal Courthouse and then headed back north to the West Precinct…leaving behind a trail of property destruction. These are criminal acts, not peaceful protests.”

The police continued to update people on events, stating that the rioters had began attacking officers with rocks, bottles, and other thrown objects. According to the police, one officer was injured.

The protests continued throughout Sunday.

Sgt. Lauren Truscott said in a news conference, that the groups targeted Amazon and Starbucks, that they arrived with baseball bats and mortar-like fireworks that they were using at close range to injure officers.

Truscott also stated that a pyrotechnic device was used to start a fire in a Police Precinct’s lobby and that the anarchists were well organized, attacking specific buildings.

Does the above sound like a peaceful protest or domestic terrorism?

The definition of a terrorist organization: “Unlawfully using violence and intimidation, especially against civilians, in the pursuit of political aims.”

It’s time we call these American riots what they really are.

CHECK OUT: From the 20 Most Dangerous Cities in America, 18 of them are run by Democrats (and the other two are independents).