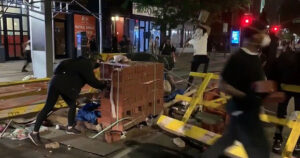 As American riots dominate the streets, President Trump has been left no choice but to give an ultimatum to Democrat Governor’s, dispatch your National Guard or he’ll send in the military.

Illinois Gov. J.B. Pritzker told CNN: “I reject the notion that the federal government can send troops into the state of Illinois,” but what if it is proven that American citizens are under attack by domestic terrorists rather than impassioned protesters looking for justice?

The proof is available if the Governor wants to see it.

Those who say President Trump is making events worse with incendiary comments are clearly ignorant of the truth. The riots and looting happened from the start. Before the President said anything. The right to peacefully protest has been decimated, just like people’s property and lives by groups of coordinated, prepared, and financed rioters out to attack America.

This isn’t about justice for George Floyd. It’s about saving the country.

CHECK OUT: Hypocrite reporter supports the burning down of affordable housing but when rioters reach his house, he calls them animals and tells them to go back to where they live.

WHAT’S HAPPENING: Palettes of bricks are being left across America and those leading protests appear to have prior knowledge of their placement while out on the streets.

One person protesting tweeted: “BREAKING: tonight’s Dallas riot was pre-planned. Organizers were directing the crowd where to go. They had pallets of 100 bricks ready for rioters. They were yelling to the crowd “go left, there are 100 bricks on the corner over there.” This wasn’t random chaos”

That is premeditation and strategy. Clearly, it is not a protest gone bad, it’s a full-blooded attack on America. Surely, if everyday people are seeing this, Governors, intelligence agencies, the police, and mainstream media can see it too?

Ironically they are, but nothing is being done about it.

CHECK OUT: Arrested looter gets asked why and gives blunt honest answer, “It’s all about the money!”

Police Asking For Help Over Bricks

This isn’t some new evidence. Since Sunday, May 31, people, including police officers and Sheriffs have been asking about these freshly placed piles of bricks, which rioters are using to attack property and police.

For example, the Kansas City Police Department has been requesting information: “We have learned of & discovered stashes of bricks and rocks in & around the Plaza and Westport to be used during a riot. If you see anything like this, you can text 911 and let us know so we can remove them. This keeps everyone safe and allows your voice to continue to be heard.”

THE QUESTION: There’s no doubt the bricks are being deliberately placed, and that some people who are part of the protests know about them in advance. The question is, who is supplying the bricks? The people running the riots or a third-party?

The price of a palette of bricks isn’t cheap. Imagine that, across the nation, nightly. So not only are the riots planned, the violence is premeditated and being supported by someone or an organization with enough money to buy and deliver huge quantities of bricks nationwide.

Surely there is surveillance footage and financial records to identity those who are doing this?

CHECK OUT: AOC gives “peaceful” protesters tips on how to hide their identity and protect their hands with heat resistant gloves. It sounds like she’s inciting violence to us.

Look at the videos and pictures below for proof this isn’t a conspiracy theory.