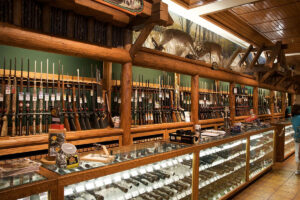 This is the country we live in right now. A major media outlet can say that Americans oppose reopening gun stores while other data shows otherwise.

THE POLL: The Washington Post and the University of Maryland conducted a telephone poll between April 28 and May 3. Asking 1,005 adults a variety of questions, and they voted as follows:

The poll also found that Americans gave the President negative marks for his response to the COVID-19 pandemic, while overwhelmingly approving Dr. Anthony Fauci, the medical advisor to the President.

Considering the President followed the medical advise of Dr. Fauci for several weeks, surely their evaluation should be mutual?

CHECK OUT: Nancy Pelosi and her cohorts standing in the way of a real Chinese investigation into COVID-19.

Digging Deeper Into The Poll

When looking at the poll numbers you can see that:

In comparison to what The Washington Post and the University of Maryland have concluded in their poll, the FBI reported that there was a record number of firearm background checks made in March and April.

People understandably remain fearful of COVID-19 but some are equally scared of the lockdown. Americans want to get back to work because they cannot wait for a vaccine or accurate testing. Waiting in lockdown is simply not economically possible for most people.

One fact that shows people are looking to return to the outside world is the FBI’s firearm background check numbers.

April 2020, the FBI stated that 2,911,128 background checks were conducted. This is the highest number of checks of any April since the beginning of the National Instant Criminal Background Check System (NICS) in 1998.

With this unprecedented surge for firearms, it’s clear some people are ready for gun stores to reopen. Surprisingly, California is one of the states who has seen this surge, so perhaps some Democrats are looking at taking up their Second Amendment rights after all.

CHECK OUT: There was a deep state coup and all of America should have chills over newly opened FBI records.