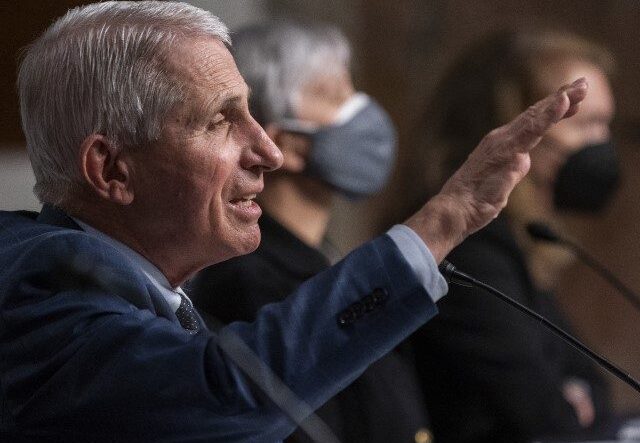 Dr. Anthony Fauci this week insisted that blue states finally moving to lift mask mandates has nothing to do with politics, asserting it simply has to do with the data, despite the fact that the science has not changed, as prominent conservative politicians have pointed out.

“I wouldn’t say it’s the politics. I think it’s the different evaluation of what’s right for a particular community,” Fauci said during a Monday appearance on MSNBC, discussing the wave of blue state leaders who have suddenly had what Florida Gov. Ron DeSantis (R) described as an “epiphany” and began to announce the end of mask mandates across the states and in schools.

“When you use the word politics, I’m not sure it’s that. I just think at the local level, there’s a strong feeling of needing to get back to normality,” Fauci said before pointing to the “science of it.”

“Now, if you look at the science of it, I mean the direction is going in the right direction. Are we there yet in every single place throughout the country? I don’t believe so. But there are some places that are looking at what the trajectory is, and are saying let’s go with it,” the White House medical adviser added, insisting blue state leaders are “trying to get back to some form of normality by pulling back on restrictions.”

Over the course of the past week, several blue state leaders, including Illinois Gov. J.B. Pritzker (D), New Jersey Gov. Phil Murphy (D), and Delaware Gov. John Carney (D) announced plans to pull back on certain mask restrictions. But conservative critics have pointed out the timing is of interest.

“The science has not changed one iota. We knew from the beginning, and that’s why Florida never imposed a forced masking policy on school children, and that’s why we fought to liberate the kids from the forced masking that was done on the local level because there was never a justification for it,” DeSantis said during a press conference last week.

Sen. Tom Cotton (R-AR) made a similar observation during a Senate floor speech last week, explaining that Democrats are only now making these moves because they are nervous ahead of the midterm election.

“Sometimes I hear the phrase, the science changed. The science hasn’t changed. What’s changed is that there’s an election coming, and Democrats have seen the polling on this question,” he stated.

“Now they are running scared and they want to pretend that they didn’t force your kid to wear a mask for two years. You see it in states that are run entirely by Democrats — California, New Jersey, New York. The president’s own Delaware,” Cotton added, reminding Americans these Democrat-supported masking policies still have some toddlers “being forced to a hot, restricted and ineffective mask for hours on end.”