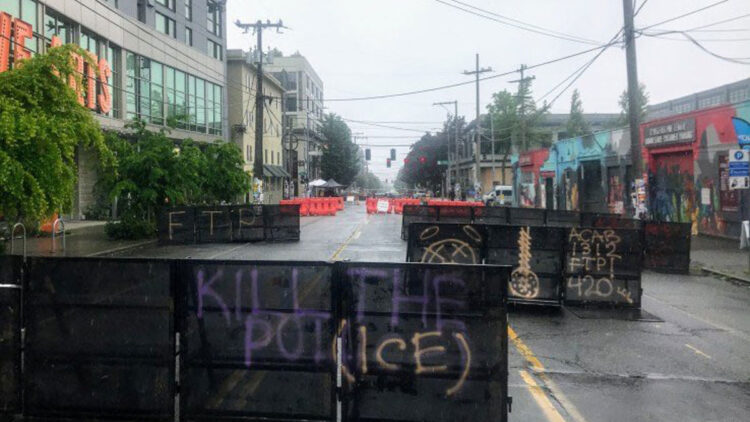 Antifa, a group President Trump declared as terrorist several days ago, have somehow, with the blessings of the mayor, taken control of six-blocks of a city.

This retreat and surrender evolved quickly after a weekend, where according to those on Capitol Hill, saw the most aggressive show of crowd control yet by the Seattle Police Department.

This isn’t the first time a city has been taken over. In 2018, Antifa took control of a Portland location, in five weeks it became a biohazard zone. Where streets were filled with needles, local residents and businesses were terrorized, and then taxpayers had to cover the costs of the cleanup.

According to one independent journalist: “Seattle Mayor Jenny (Durkan) is allowing a dangerous situation to fester. Antifa militants have taken over & created an “autonomous zone” in city w/their own rules. Police precinct abandoned. Antifa set up barricades to create a border. Calling for volunteers to provide an armed guard.”

What Happened In Seattle?

Monday 8, June: The Seattle Police Department, riot police, and National Guard cleared out the East Precinct in Capitol Hill. It was a decision made so that demonstrators could march past the building later that day without incident.

What’s alarming is that the demonstration was allowed despite there being a credible threat that the East Precinct would be burned down. The threat was so real, officials were warning neighboring businesses and organizations. Plus the Fire Department was proactively checking buildings to see if they could be treated with a fire suppressing foam.

Ultimately, the Precinct was boarded up, barricaded, cleared out, with most officers sent to mobile locations.

By Tuesday morning, the Precinct still stood, covered in graffiti and rubbish just like the rest of the neighborhood. Yet there was one big difference to the area.

Retreating To Keep The Peace?

On Monday morning everyone was preparing for arson, by the evening the tactics changed. The mayor wrote that: “In an effort to proactively de-escalate interactions between protestors and law enforcement outside the East Precinct, Chief Best and Seattle PD officers have removed barricades surrounding the East Precinct while safely securing the facility.”

Regardless, by Tuesday morning, the barricades diverting demonstrators had been moved to form a border.

One person in Capitol Hill wrote: “Protesters have put on the barricades that those coming into the area are “now leaving the USA” and entering the “Cap Hill autonomous zone” or “Free Capitol Hill”.”

These barriers are already impacting the city, blocking traffic from passing through 12th Avenue and E Pine. Vehicles are turning away to avoid the blockades and nothing is being done about it. Not to mention the fact, there is a call to arms to defend the barricade.

It appears Seattle has given in to the demonstrators, potentially proving to others that anarchy and the threat of destruction works — and we always thought America didn’t negotiate with terrorists.