AOC Tells Rioters How To Keep Identity Secret And Much Worse 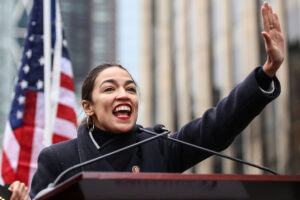 THE ISSUE: In one post, AOC tells people how to keep their identity hidden, encourages preparedness for violent action, and is racially divisive.

FACT ONE: The Democrat who represents east of the Bronx, and north of Queens, makes it clear to wear goggles, a mask, and nondescript clothing to cover identifying tattoos.

For those who think the mask is for COVID-19 protection, think again. If you’re planning to protest, social distancing is a distant memory. Plus, when telling people to wear goggles and nondescript clothing to hide identifying tattoos, the purpose is clear and obvious.

The question is, if someone is going to protest peacefully and safely why do they need to protect their eyes and identity?

FACT TWO: In the post she tells protesters to wear heat resistant gloves and disable specific features on cell phones.

There’s only one possible reason to wear heat resistant gloves and that is to handle something hot. Which should not be something any peaceful protester is doing. Plus, disabling features on your cell phone, including data has only one value: To stop trackable and traceable data being backed up in the cloud.

We’ve screen grabbed the graphic AOC posted because it’ll likely be taken down. Check it out on AOC’s profile to see that’s real.

CHECK OUT: For those still saying these protests are about justice, listen to this arrested looter.

We’re not the only one questioning the Instagram post by AOC. The Conservative Activist who is running for Congress in southern Nevada, Mindy Robinson also asked: “Explain to me why a congresswoman like AOC is instructing protesters with such handy “tips” like how to hide their tattoos so they can’t be identified, and to make sure they bring heat resistant gloves (to presumably) throw tear gas canisters back at police?”

It’s the question we want answered and the one mainstream media should be asking.

There’s no denying what AOC is doing. She is telling rioters how to be prepared for violent action. The difference is that when the President was presumed to be inciting violence, people jumped all over him. Whereas it seems Democrats can say and do anything without accountability.

In her post about protesting safely, AOC wrote: “There are increasing reports and investigations that white supremacists may be infiltrating these protests, breaking windows and destroying property.”

In the same post, she added: “FOLLOW THE DIRECTIONS OF GRASSROOTS BLACK ORGANIZERS. They have been at this a long time and are disciplined in the ropes of community organizing and demonstration.”

Considering this started because of police brutality and racism, AOC didn’t need to add skin color to what she wrote. It only adds fuel to a fire that’s already raging, and blame when there’s plenty to go around.

In the tweet below by the Nashville Police Department, you can see a white man starting a fire (he has now been arrested) and two black people smashing windows. The irony is that, if the arrested man had followed AOC’s protest tips, his easily identifiable tattoos would have been hidden and his arrest wouldn’t have happened.

CHECK OUT: The celebrities who are bailing out rioters from jail.