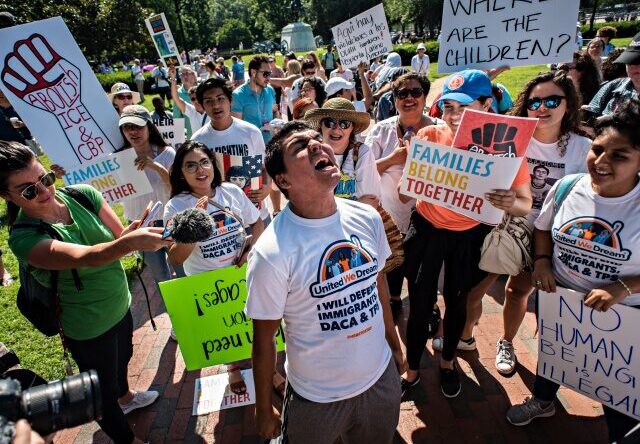 WASHINGTON, DC -- JUNE 30: Gerson Quinteros, a DACA recipient from El Salvador who lives in DC, leads protesters from United We Dream, before the start of the rally. Protestors of the Trump Administration's immigration policy participate in a rally at Lafayette Square then march to the Justice Department. Billed as the Families Belong Together Rally and March, the action in the District is one of a reported 700 events nationwide.…. (photo by Andre Chung for The Washington Post)

Arizona voters have approved a Republican-led law that will give in-state tuition to illegal aliens, reversing a ban first imposed in 2006.

Last year, as Breitbart News reported, the Republican-majority Arizona state legislature passed a plan to put Proposition 308 on last week’s ballot for voters to decide whether they wanted to throw out the state’s ban on in-state tuition for illegal aliens.

As of the last count on Monday evening, Arizona voters favored Proposition 308 by a more than 60,000 vote margin — indicating that the initiative will in fact pass and illegal aliens will now be eligible for in-state tuition.https://3e6d46a2e029a853552374a89c24c3d3.safeframe.googlesyndication.com/safeframe/1-0-40/html/container.html

Prop 308 is the smart thing to do and it is also the right thing to do. Dreamers are Arizona kids, and they deserve the same opportunities as other Arizona students. This is their home. Let’s make sure our college-bound Dreamers, who meet the same requirements as their classmates, pay the same in-state tuition rate. It’s only fair. [Emphasis added]

Aside from Arizona Republicans, major donor networks were behind the initiative’s push to voters including TheDream.US — partially funded by billionaire Bill Gates, the Ford Foundation, billionaire Michael Bloomberg, and billionaire Mark Zuckerberg — along with the Koch brothers’ organizations and George Soros-linked activists.