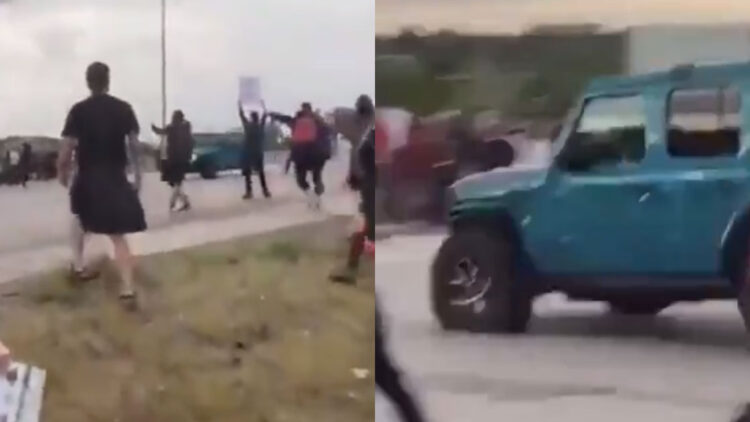 Aurora, Colorado: During an illegal expressway blockade, an armed protester opened fire at a speeding vehicle that forced people off the road. His shots damaged the vehicle and hit two fellow protesters.

The incident happened Saturday, July 25, on the I-225. As people fled from the jeep, the armed protester fired several shots. The driver was not injured and the protesters who were shot were taken to hospital in stable condition.

In the police report (below) they admit to not knowing how many armed protesters fired at the car. Plus, it was very close to being a murder investigation as one of the protesters suffered a bullet graze to their head.

CHECK OUT: Black Lives Matter protester armed with an AK-47 killed by a motorist in Austin, Texas.

This incident could have resulted in several deaths, and Colorado Governor Jared Polis and Aurora Mayor Mike Coffman should be asked some serious questions.

A protest on an expressway is illegal. It should have been reported and stopped. Yet, protests continue to escalate. With more and more armed protesters present.

The mixture of angry mobs and fearful drivers is a recipe for disaster. Leaders who don’t crack down on this must be held accountable for the consequences now and in the future.

CHECK OUT: 62% of Americans are afraid to speak their political beliefs. Only staunch liberals feel safe to do so.

The Aurora Police Department reported: “Around 7:00 P.M. Aurora Police observed, from a media helicopter, a Jeep that was traveling northbound on I-225 heading towards the protesters.”

They continued: “The Jeep then drives into the crowd. While the Jeep was being driven through the crowd, multiple shots were fired by a protester. At this time it is unknown if multiple people fired their weapons, or if it was just one individual. Also, there have been no reported injuries reported to us about anyone being hit by this vehicle.”

The APD are currently investigating and looking for the armed protester and driver.

CHECK OUT: Teacher fired after supporting President Trump’s stance on getting kids back to school.