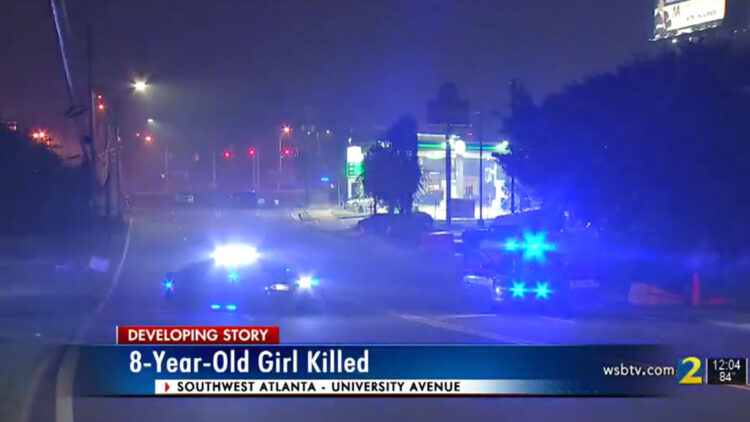 Déjà vu: First it was Seattle’s Mayor Jenny Durkan, who eventually stopped marauding armed protesters in Capitol Hill’s Autonomous Zone after two murders. Now, another Democrat Mayor has been backed into a reaction after letting anarchists run the streets in the name of Black Lives Matter.

Atlanta, July 5: 8-year-old Secoriea Turner was riding in a car with her mother, and mother’s friend. They turned into a parking lot at 1238 Pryor Road and was stopped by protesters blocking the entrance.

The police said in a statement: “At some point, someone in that group opened fire on the vehicle, striking it multiple times and striking the child who was inside. The driver then drove to Atlanta Medical Center for help.”

CHECK OUT: Watch another “peaceful protester”, with their identity hidden in an outfit AOC would be proud of, sneaking up to a driver who had stopped because of a human roadblock and opened fire.

Explaining Herself To Armed Protesters

Pryor Road is near the now infamous Wendy’s car park, the location in which Rayshard Brooks was shot by police. According to WSB-TV Atlanta reports, that location had been the scene of many protests since the shooting on June 12.

In the Brooks case, the shooting occurred because he resisted arrest, fought the officers, and he took and fired a taser at the officers. In this latest shooting, 8-year-old Secoriea Turner was truly innocent.

Yet, only one of the two shootings has made headlines around America.

Secoriea’s mother, Charmaine Turner said: “We understand the frustration of Rayshard Brooks. We didn’t have anything to do with that. We’re innocent. My baby didn’t mean no harm.”

This is where America is right now, a murdered child’s mother is explaining herself to murderous anarchists.

Her father, Williamson said: “They say black lives matter. You killed your own this time. You killed a child. She didn’t do nothing to nobody.”

Those who have supported the riots should be held accountable.

Atlanta Mayor Keisha Lance Bottoms, who has supported the protests throughout said: “You can’t blame this on a police officer. You can’t say this is about criminal justice reform. This is about some people carrying some weapons who shot up a car with an 8-year-old baby in the car for what?!? Enough is enough.”

Finally, the Mayor is getting tough.

However, this comes after the protesters had re-erected barriers the city had taken down outside of Wendy’s. According to reports, it was because the mother’s car tried to get through these anarchist’s barriers that the shooting started.

Apparently, Mayor Lance Bottoms had been negotiating with protesters to remove the barriers, and to stop occupying Wendy’s. Bottoms said: “At the point that an 8-year-old baby is killed, the discussions have ended.”

The discussions should never had started.

This is just another Democrat Mayor who turned a blind eye, called the protests peaceful, and let anarchy escalate to the point of senseless deaths.

As we said earlier, those who have supported the riots should be held accountable.

CHECK OUT: The NFL will play a rendition of the Black National Anthem before “The Star-Spangled Banner” at each Week 1 game. That’s right, the NFL is fighting racism with segregation.