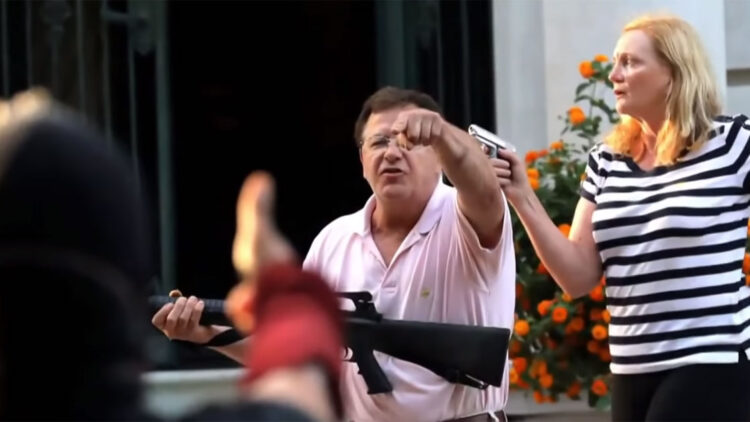 Two Missourians who guarded their home against trespassing protesters were charged with felony unlawful use of a weapon on Monday. Hours later, the Missouri Attorney General decided enough was enough.

St. Louis Circuit Attorney Kim Gardner said in a statement: “It is illegal to wave weapons in a threatening manner — that is unlawful in the city of St. Louis.”

She added that Mark and Patricia McCloskey, who are both personal injury attorneys would likely be sentenced to a diversion program, not jail if convicted.

A diversion program for the McCloskeys would likely mean completing community service hours, anger management, or a racial awareness program.

The McCloskeys attorney said he found the decision to charge disheartening as he believed “no crime was committed.”

CHECK OUT: Two people charged for a hate crime after painting over a Black Lives Matter mural.

In a prepared statement, the Attorney General said: “The right to keep and bear arms is given the highest level of protection in our constitution and our laws, including the Castle Doctrine, which provides broad rights to Missourians who are protecting their property and lives from those who wish to do them harm.”

The McCloskeys had stated previously that they were defending themselves from a crowd of protesters, some of whom had violently threatened them, after breaking into a private street that included no trespassing signs and iron gates.

The Attorney General’s statement continued: “Despite this, Circuit Attorney Gardner filed suit against the McCloskeys, who, according to published reports, were defending their property and safety. As Missouri’s Chief law enforcement officer, I won’t stand by while Missouri law is being ignored.”

CHECK OUT: A mayor hunts down the criminal who committed an ‘All Lives Matter’ hate speech.

In Missouri, the castle doctrine law is recognized, and Attorney Gardner never stated why it wasn’t relevant in the McCloskeys case.

The ‘castle doctrine’ law “allows residents to use force against intruders, without the duty to retreat, based on the notion that your home is your castle.”

This includes the use of deadly force, if the resident believes it necessary.

The question is whether the law saw the McCloskeys show of firepower as reasonable. For those who believe the protests are peaceful, it wouldn’t be.

For those who watch the riots, it would.

In 2016, a Missouri Court of Appeals determined that deadly force is only acceptable when protecting yourself or another from “imminent unlawful force.”

Once again, due to how quickly protests have become riots, the McCloskeys could have believed themselves to be in danger of imminent unlawful force.

Regardless, charging the McCloskeys for holding firearms goes against their Second Amendment rights.

So either way, Circuit Attorney Kim Gardner was overstepping with the charge.

CHECK OUT: A student is called out by the police after leaving racist notes to himself, yet his University does nothing.