Austria: Unvaccinated Could Face Prison as Country Locks Down and Announces Vaccine Mandate 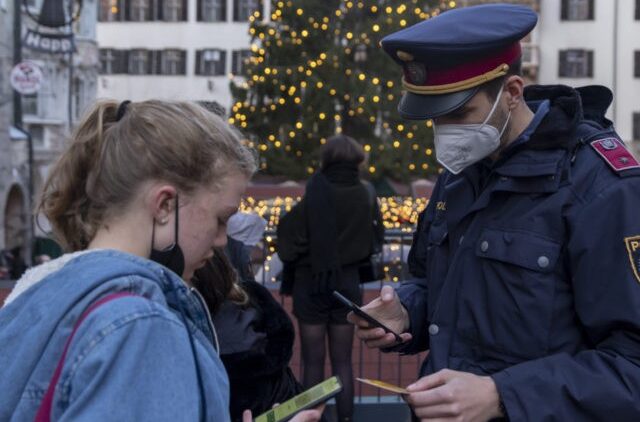 The Austrian government has announced it will be forcing all residents to take a Wuhan virus vaccine. Those who refuse will face heavy fines and possible prison sentences starting in February.

Austria will be the first major country in Europe to force its citizens to take the vaccine or face fines or potential prison sentences for not doing so. The move comes as the government has also placed the entire country under a strict 20-day lockdown, just days after it locked down the unvaccinated nationwide.

The new lockdown measures will begin on Monday, November 22nd, according to a report from the newspaper Kronen Zeitung and will see Austrians largely confined to their homes and only allowed to travel for essential purposes such as purchasing food or outdoor exercise, although schools and kindergartens will remain open.

Although the general lockdown is scheduled to end on December 12th, it will remain in place for those who are not vaccinated against the coronavirus indefinitely and, as mentioned previously, from February 2022 all Austrian residents will be mandated by law to take the vaccine.

Austrian Chancellor Alexander Schallenberg commented on the drastic new measures, saying that previously there had been “a political consensus that we do not want compulsory vaccination, and I also assumed that people should be persuaded to be vaccinated.”

He stated that “too many political forces, flimsy opponents of vaccination and fake news” had contributed to Austria having one of the lowest vaccination rates in Europe.

Kickl, who has been public about not being vaccinated against the coronavirus, has participated in prior demonstrations against coronavirus lockdowns.

The FPÖ has announced a demonstration in Vienna on Saturday, with some estimating 10,000 people or more may attend.

The Freedom Party leader has also called into question the constitutionality of the mandatory vaccine proposal and said he expects the Austrian Constitutional Court to release a statement on what he labelled a “government attack on the fundamental right of the physical integrity of the people in this country.”

The new general lockdown following the lockdown of the unvaccinated was preceded by the regional governments of Upper Austria and Salzburg announcing they would implement lockdowns for the unvaccinated locally.

While Austria is the first major country to attempt to impose mandatory vaccination on all citizens, other countries have expressed openness to the idea.

The man expected to take over from Angela Merkel as Chancellor of Germany, Olaf Scholz, stated earlier this month that he was open to discussions on mandatory vaccinations, for example.