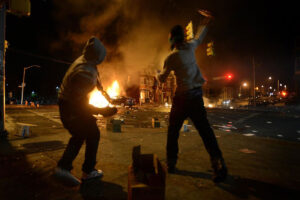 A cafe owner in Birmingham, Alabama has been asking for forgiveness ever since a private message was leaked. Since then his co-owner is begging “peaceful protesters” to not burn down his livelihood.

Michael Dykes, a founder of the Parkside Cafe in Avondale, Alabama called George Floyd a thug in a message to his managers. The message read: “We should go up one or two dollars on everything until June 10th. Call it a protest tax because all the idiots that went to the protests are responsible for us not being able to open normal hours. Any employees that went or are going should resign. Mr. Floyd was a thug, didn’t deserve to die but honoring a thug is irresponsible.”

FACT-CHECK: George Floyd, moved to Minneapolis in 2014 and had not been in trouble with the police since relocating. At the time of his brutal murder, he was under arrest for using a fake $20 bill and was under the influence of fentanyl and methamphetamine. Floyd’s criminal record pre-2007 included aggravated robbery, where he robbed a pregnant woman’s home at gunpoint. He also served jail time for holding cocaine in 2002 and 2005, criminal trespass in 2002, and theft in 1998.

Clearly, for twelve years George Floyd was not in trouble with the police but Michael Dykes was factually correct in calling him a thug. This does not change the fact he was brutally murdered, and that serious action should be taken. As for upping the price under a protest tax or telling employees who attended the protests to resign, one is a business decision, and the other is everyone’s right.

The message from Dykes was circulated, with one of his employees, Lacey King putting it on Facebook: “This is the owner of Parkside, this is the man I work for, Michael Dykes. Please someone give me a new job bc this man is the most hateful person I have ever met in my life. The evil texts I’ve received from him over the years are astonishing. This is just one example.”

Since then, three members of staff have quit and the message has been widely circulated and criticised.

Michael Dykes said in an interview: “I was just complaining about the situation. I’m angry that some of my friends businesses downtown are boarded up. It just makes me angry. I just wish it would stop.”

He continued: “I’m not a racist. I have many black friends. I have friends from Gambia and other places. Yes, I made a mistake and called Mr. Floyd a thug. I regret that. I really do regret that. … I am sorry for what I said. I did not mean disrespect to Mr. Floyd, ever.”

Ironically, Dykes, who is white, said he was inspired by political activist Candace Owens. A black conservative commentator who came out in a video saying she does not support George Floyd as a martyr but does hope his family gets justice.

This is a completely fair stance. Yet, ironically, Sykes is getting criticized while Owens is supported. Even the GoFundMe page set up by Owens for the Parkside Cafe was pulled down because it was “intolerant.”

Dykes’s frustration is understandable from a business owner’s perspective. The protests, which seem to regularly lead to riots and violence have caused devastation just as businesses were finally able to recover from a crushing lockdown. A lockdown the mainstream media and government seem to have disgustingly forgotten since protests began.

Dykes said: “Finally we get to reopen and then this happens. They started these protests and I was hoping that people wouldn’t go. Why would you have a protest during a pandemic? I was angry that my employees were still going to the protests after the restrictions they already caused. … They shouldn’t have protested. It’s not fair. I really think the City of Birmingham and Mayor Woodfin are negligent.”

Again, his frustration is understandable. Businesses have tried to keep employees in work while they were locked down, and yet people who couldn’t go to work for safety have been allowed to go and protest despite businesses in financial ruin and the potential spread of COVID-19.

The truth is, Dykes has no right to stop people protesting but he has freedom of speech, so his words, unless explicitly offensive shouldn’t cause this amount of hatred.

The backlash got so bad that Dykes’s business co-owner, Robert Bagwell said. “I support the right to protest and I would like people to do it safely, peacefully. I get it — there’s a ton of anger out there and it’s justified anger. If you want to protest Parkside, I get it. Just please don’t burn us. This is the only livelihood I’ve ever known. This is all I got.”

He continued: “I’d just like to say how sorry I am for the dumb s*** my business partner said earlier today. It is in no way indicative of myself or any of the staff at Parkside. We love our state, neighborhood and our regulars. This is not who we are.”

Dykes also said: “I would like to add that all lives matter, and police brutality is unacceptable.”