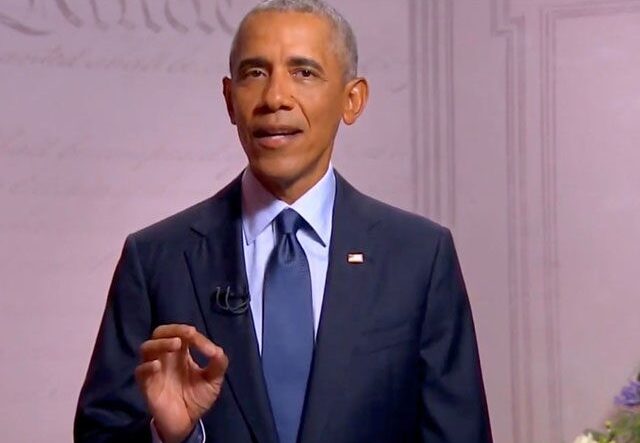 Former President Barack Obama in a major speech on Thursday called for more regulation of social media content, in order to diminish “disinformation.”

The former president delivered a speech on the issue at Stanford University after spending months studying the subject.

He described himself as “pretty close to a First Amendment absolutist” but immediately clarified that it did not apply to social media companies.

“The First Amendment is a check on the power of the state. It doesn’t apply to private companies like Facebook and Twitter,” he said, calling for more “value judgements” on content moderation and censorship on social media.

“[O]ver time we lose our capacity to distinguish between fact, opinion, and wholesale fiction. Or maybe we just stop caring,” he said.

Obama also complained that an overwhelming flood of information made it difficult to discern the truth.

“Our brains aren’t accustomed to taking in this much information this fast, and a lot of us are experiencing overload,” he said.

Obama warned that dangerous people were using social media to distract the public.

“People like Putin and Steve Bannon for that matter understand it’s not necessary for people to believe disinformation in order to weaken democratic institutions, you just have to flood the public square with enough raw sewage,” he complained.

The former president argued for a series of social media reforms and regulation, warning the nature of democracy itself was at stake.

He complained there was no way to distinguish online between “a peer-reviewed article by Dr. Anthony Fauci and a miracle cure pitched by a huckster.”

The wide variety of content on the coronavirus and vaccines, Obama said, was concerning, as some people chose not to get vaccinated.

“People are dying because of misinformation,” he said.

Obama noted that content moderation by tech companies already exists, but argued for more moderation, even though disinformation is difficult to identify.

“That doesn’t mean some things aren’t truer than others. Or that we can’t draw lines between opinions, facts, honest mistakes, intentional deceptions,” he said.

The former president laid out a set of principles of how content should be moderated, either by tech companies themselves or by a government entity:

Whether it strengthens or weakens the prospects for a healthy inclusive democracy.

Whether it encourages robust debate and respect for our differences.

Whether it reinforces rule of law and self-governance.

Whether it helps us make collective decisions based on the best available information.

Whether it recognizes the rights and freedoms and dignity of all of our citizens.

“Regulation has to be part of the answer,” Obama said, calling for ways to start “slowing the spread of harmful content” online.

Man with his mouth covered with tape (iStock / Getty Images Plus)

Obama expressed regret that he believed, prior to the 2016 election, that the public could still distinguish fact from fiction on social media, even though he suffered personally and politically from disinformation.

“What does still nag at me was my failure to fully appreciate at the time just how susceptible we had become to lies and conspiracy theories,” he said.

The former president cited the principles in the “Fairness Doctrine,” widely criticized by the conservative movement, to help control what kind of information was allowed in broadcasting. He also called for social media algorithms to be regulated by government inspectors and regulators, just like other industries.

Obama recalled what he described as the happier days of the internet, when he was first elected president. “In the early days of the internet and social media, there was a certain joy of finding new ways to connect and organize … there was so much promise,” he said. “I know — I was there.”

Obama expressed sadness that the internet and socialism has had “a grimness to it” since he left office, and called for change.

“We have a choice right now: Do we allow our democracy to wither? Or do we make it better?” he said.