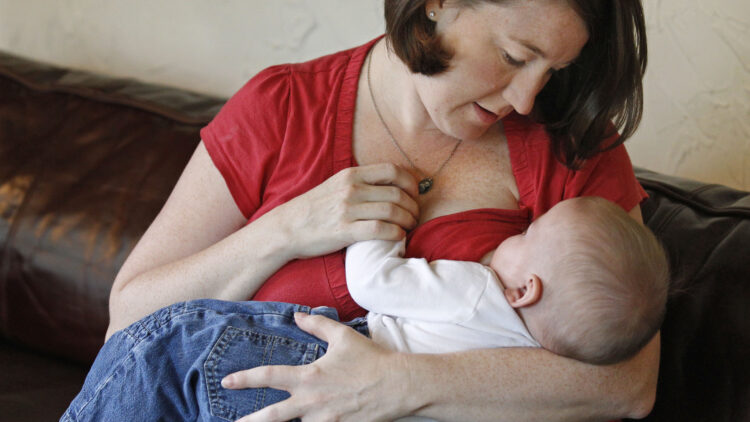 In this Sept. 14, 2011 photo, Jessica Ewald breast-feeds her 5-month-old son Bennett at her home in Oakbrook Terrace, Ill. Like many new moms, she got a hospital goody bag with supplies including free formula and formula coupons that she gave away as soon as she got home. Ewald, the daughter of a breast-feeding activist who fought to get those goody bags out of hospitals, says hospitals sending newborns home with formula can really undermine a woman’s determination to breast-feed. (AP Photo/M. Spencer Green)

The Biden administration opted to replace the word “mothers” with the unusual phrase “birthing people” in its 2022 fiscal year budget proposal, prompting scorn and mockery from critics online. Fearless with Jason Whitlock about:blank

In the section, the administration laments that the “United States has the highest maternal mortality rate among developed nations, with an unacceptably high mortality rate for Black, American Indian/Alaska Native, and other women of color,” before offering its solution for “birthing people” (emphasis added):

Interestingly, in another section of the budget proposal regarding paid leave in the American Families Plan, the administration uses the word “mothers.”

Wall Street Journal writer and author Abigail Shrier wrote, “100% of birthing people are, and have always been, women. I can’t believe I have to educate the Biden Administration in these basics, but here we are.”

“By not saying ‘women’ you are making your feelings about us pretty plain,” she added.

“I remember when we used to use the phrase ‘the flag, motherhood, and apple pie’ to signify things about which Americans were unified. It is now ‘an offensive symbol of white supremacy’ and ‘birthing people.’ So I guess we’re still good with apple pie,” added Daily Wire editor emeritus Ben Shapiro.

The Republican National Committee called use of the phrase “woke, anti-science nonsense.

Last month, in response to progressives such as Democratic Rep. Cori Bush (D-Mo.) using the phrase, conservatives lashed out, noting its dehumanizing affect.

Commentators such as Tim Carney of the American Enterprise Institute and the Daily Wire’s Matt Walsh blasted progressives for reducing humans “to atomized autonomous individuals without a role or connection,” calling leftism a “scourge” and a “poison.”

The phrase is reminiscent, albeit a bit less clunky, than another peculiar one used in an official document by a federal health agency earlier this year.

In February, the National Institutes of Health refused to utter the word “women” instead referring to them as “pregnant and lactating people.”