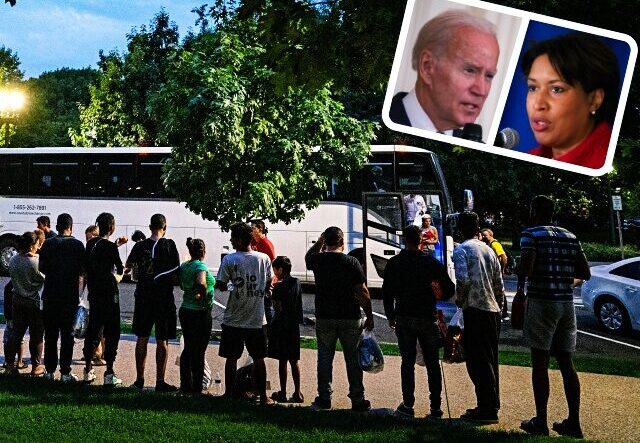 WASHINGTON, DC - AUGUST 11: Migrants who traveled from Texas line the sidewalk within view of the U.S. Capitol on Thursday, Aug. 11, 2022 in Washington, DC. Since April, Texas Governor Greg Abbott has ordered over 150 buses to carry approximately 4,500 migrants from Texas to Washington, DC, to highlight criticisms of US President Bidens border policy. (Kent Nishimura / Los Angeles Times via Getty Images)

President Joe Biden’s Pentagon has again rejected a request from Washington, DC, Mayor Muriel Bowser (D) to activate the National Guard to help with an influx of illegal immigration.

In a request earlier this month, Bowser asked Biden’s Department of Defense to deploy the D.C. National Guard after her last request was rejected by the administration. The request comes as Texas Gov. Greg Abbott (R) has carried out his plan that buses border crossers and illegal aliens to the nation’s most dangerous sanctuary cities.

According to a copy of a letter to the city reviewed by The Associated Press, the Defense Department said use of the D.C. National Guard would be inappropriate and would hurt the overall readiness of the troops, forcing some to cancel or disrupt military training. [Emphasis added]

The letter said the department also is concerned about putting uniformed military members in direct contact with migrants to provide food, sanitation or other support, saying the troops have no real experience or training for that mission. [Emphasis added]

A bus that traveled from Texas carrying migrants is seen within view of the U.S. Capitol on Thursday, August 11, 2022, in Washington, DC. (Kent Nishimura / Los Angeles Times via Getty Images)

Migrants disembark a bus from Texas within view of the U.S. Capitol on Thursday, August 11, 2022 in Washington, DC. (Kent Nishimura / Los Angeles Times via Getty Images)

Previously, Biden officials said they are worried about “the optics” of pro-sanctuary city Democrats like Bowser sounding the alarm on illegal immigration.

In July, Bowser called Abbott’s migrant buses to D.C. a “tipping point” for Washington, DC, and in her recent National Guard request, she called the arrival of the buses a “crisis.”

More than a few thousand border crossers and illegal aliens have been bused to Washington, DC, since Abbott started the initiative. The figure, though, still pales in comparison to the level of illegal immigration seen by American border communities under Biden.