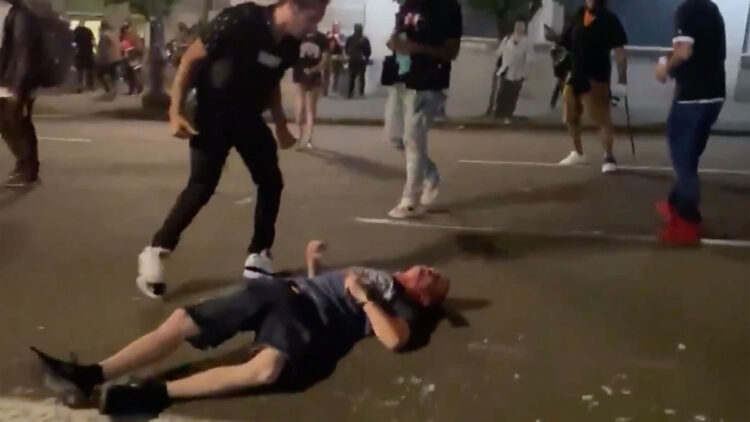 According to reports, the driver tried to intervene when the BLM mob turned on a trans-woman. In the footage below you can see the mob tackle her to the ground and attack the driver’s truck.

The police said: “Protesters were chasing the truck before it crashed, and they assaulted the driver after the crash.”

One thing that has to happen, is for the police to stop calling these criminals protesters. They are domestic terrorists and should be treated as such.

“He didn’t do nothing bro”

Video by @livesmattershow shows the altercations that happened in downtown Portland before the car crash. The BLM mob is beating a blonde woman and they tackle her to the ground. #PortlandRiots pic.twitter.com/c0xbTr2Eon

Keep swiping down to see the attack.

CHECK OUT: Watch stupid protesters getting owned by the police.

After the truck crashed, the mob pulled the driver from the vehicle.

In the video, you can hear someone in the background saying “He didn’t do nothing.”

You can also hear the driver trying to explain that he didn’t mean to hurt anyone, saying he “…was trying to get out the way.”

Despite this, the Black Lives Matter mob attacks him repeatedly. Pushing him to the ground, surrounding him, and punching him each time he tries to stand.

They continue to do this as they search his possessions.

Watch the video below, and swipe down for more.

This is the moment immediately before. The mob assaults him and makes him sit in the ground while they search his belongings. When he stands up, they brutally beat him. #PortlandRiots #antifa #BlackLivesMatter Video by @livesmattershow pic.twitter.com/tEzpIz6V9U

They finally move away from the driver, but one of the Black Lives Matter mob attacks from behind. Violently kicking the man in the head as he sits on the floor.

GRAPHIC VIDEO WARNING: Do not watch this video if you are easily upset or offending.

GRAPHIC: Rioters in downtown Portland detain man who had a car crash. They force him to sit on the ground while they search his belongings. One of them runs up and kicks him in the head, instantly knocking him out. There are no police. Video by @FromKalen pic.twitter.com/x646QheCV0

The police report stated that officers in riot gear had to assist the ambulance helping the driver as they were confronted by a hostile crowd.

Swipe down to see the thug who did it.

The Thug Who Attacked

On Tuesday, Portland police announced that they had identified the Black Lives Matter thug who attacked.

The police statement reports: “Investigators positively identified the suspect as 25-year-old Marquise Love. Investigators made attempts to contact Love but could not locate him. Investigators have left messages for Love to turn himself in but will continue to look for him as there is probable cause for his arrest.”

In the police report, they call it an assault, but many on Twitter say it should be classed as attempted murder.

Assault? How about attempted murder? That poor man may very well suffer for the rest of his life. Get serious Portland.

Considering the brutality of the attack, we would have to agree.

The police report also states that the victim has been released from the hospital and is recovering.

The big question is, where’s the mainstream media coverage?

CHECK OUT: Watch “peaceful protesters” learn to not block roads with motorcycles.