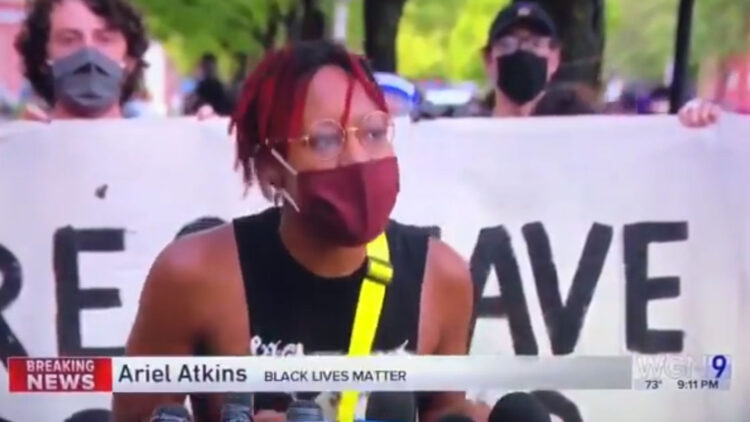 Chicago, August 11, 2020: A leading voice from the Black Lives Matter movement came out in full support of looting.

Standing in front of protesters outside Chicago’s District 1 police station, Ariel Atkins took the microphone and said it didn’t matter if someone takes a Gucci handbag because it means someone else can eat, have clothes, and have money.

This thought process ignores the repercussions of looting.

What if the loss of items force a store to close, jobs to be lost, which in turn means innocent people can’t eat, can’t have clothes, and won’t have money.

Probably not, considering many believe saying All Lives Matter is a hate crime.

The truth is, with so much pandering to Black Lives Matter, it’s no surprise that the group believes they can get away with saying and doing anything.

From ripping down statues to throwing items at police officers, and vandalizing city streets.

And here’s why she says it is fine… Because everything stolen is “reparations.”

Listen to the video below and make up your own mind on whether looting is reparations. We don’t think it is.

CHECK OUT: Two people charged with a hate crime after painting over a Black Lives Matter road mural. Surely if BLM can graffiti over everything, why can’t these people?

Is this a statement corporate America, news, and TV supports? It’s a serious question because every day we see Black Lives Matter being pushed.

In the beginning, when the message was no more police brutality, it made sense.

Yet, it no longer does and those supporting them, whether kneeling, sponsors, donations, etc., are complicit in supporting looting.

The big question is, will such a dramatic change in message and blatant support of looting change the platform Black Lives Matter is being given?

Not The First Time We’ve Heard This

This isn’t the first time crime, including looting has been excused as people just wanting to eat.

Democrat Rep. Alexandria Ocasio-Cortez said in July that the crime has increased because people “feel like they either need to shoplift some bread or go hungry.”

Or in the case of Chicago, shoplift Gucci handbags or go hungry…

Watch what AOC said below and make up your own mind:

The oddity is that these looters aren’t breaking into food stores and taking bagels, cheese, or juice. They’re breaking into and looting high-end stores, taking expensive goods.

For example, Sunday 9, 2020, in Chicago Nike shoes and Gucci bags were stolen. Are we meant to believe these people are all now trying to sell those stolen items to buy food?

If so, it’s a ridiculous belief.