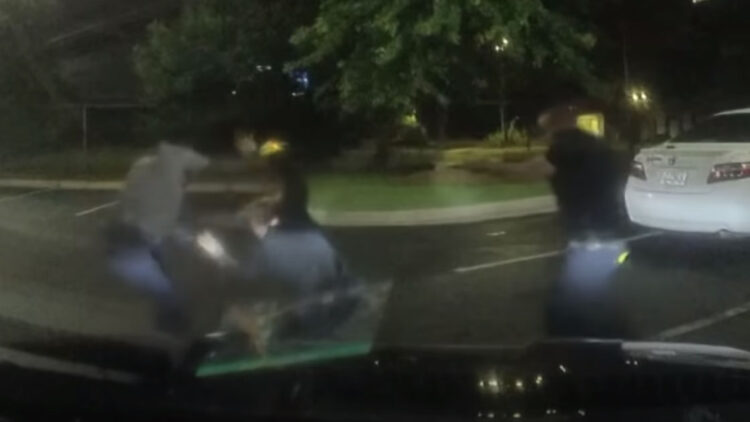 In response to these charges, some in the Atlanta Police Department decided to show their frustration, with many officers walking off the job and others refusing to start their shift.

After everything that has been thrown at the police recently, this action was inevitable, especially when the charges delivered don’t appear to be justified.

The infamous video shows Brooks resisting arrest, fighting the officers, taking a taser from the officers, clearly firing it at the officers, and then show him fleeing with the weapon in hand.

Watch the video below and make up your own mind.

Brooks, 27, a father of four, fell asleep in his car in a Wendy’s drive-through. He was asked to move by the officers, who realized he was intoxicated and had no choice but to arrest him.

In a statement, Rolfe’s lawyer said: “Mr. Brooks violently attacked two officers and disarmed one of them. When Mr. Brooks turned and pointed an object at Officer Rolfe, any officer would have reasonably believed that he intended to disarm, disable, or seriously injure him.”

It is a tragic death but if Brooks complied when being handcuffed he would have woken in a police cell the morning after. The police did their job and yet the story has been spun into: “Atlanta police killed a Black man for being drunk at Wendy’s.”

When giving his statement, D.A. Paul Howard said: “Mr. Brooks never presented himself as a threat,” which is inaccurate, he had a taser, which he fired at the police.

Ironically, two weeks before Brooks was shot, Howard even said: “A taser is considered a deadly weapon under Georgia law.” So how was Brooks not a threat?

Howard’s argument is that the taser had been fired twice before the fatal shooting, meaning the taser was no longer a lethal weapon in the eyes of the D.A. Yet, this presumes officer Rolfe knew this in the heat of the moment when under threat.

Siding With the D.A.

Atlanta Mayor Keisha Lance Bottoms said the shooting was not justified, literally backing the D.A. over the police department.

Arguments can be made about events before and after the shooting. Yet, calling the shooting unjustified is wrong. Especially as Howard released his statement without consulting the Georgia Bureau of Investigation (GBI), who are still conducting an investigation into the shooting.

They said in a statement: “The GBI was not aware of today’s press conference before it was conducted. We were not consulted on the charges filed by the District Attorney.”

Clearly, the D.A. and Mayor couldn’t wait for an investigation to be concluded.

Wednesday, June 17: It began in the early evening when an internet show host tweeted that he received an email from an officer saying: “Atlanta police officers are refusing to answer the radio and walking off of the job. The county can go screw themselves. If you want a society without police we’ll give you one. Let it burn!”

Anyone willing to consider the facts will understand why any-and-all police officers would feel this way.

Shon Gables, a news anchor with WGCL-TV wrote: “Sources confirm Atlanta Police officers in zone 6 have walked out. Sources say they drove back to their precinct, turned in their keys, and went home. Officers in zone 3 are allegedly doing the same.”

Former Sheriff, Mark Curran wrote: “Why would they continue to do it (their job) if they’re receiving even more hate? While being shamed & smeared for the actions of a few bad apples? I mean would you do that job?”

Wednesday evening, the Atlanta Mayor said to Chris Cuomo on CNN: “There’s a lot happening in our cities and our police officers are receiving the brunt of it, quite frankly.”

The issue is that the brunt is coming from people like the Mayor, who choose to support constantly violent protests over law & order.

She continued: “Our streets won’t be any less safe because of the number of officers who called out (walked off). But it is just my hope again that our officers will remember the commitment that they made when they held up their hand and they were sworn in as police officers.”

Let’s hope the blue flu isn’t contagious because if it spreads, those wanting to defund and dismantle the police will get their wish early.

CHECK OUT: The New York Times admits that they and others in the mainstream media interpret the truth through their own narratives and ignore Conservative viewpoints