Former WNBA star Brittney Griner was reportedly released by Russia in a prisoner swap for a notorious Russian arms dealer Viktor Bout, according to a US official.

In February, Griner, a two-time Olympic basketball champion, was arrested by Russia and pleaded guilty to possession of cannabis vape cartridges at an airport near Moscow.

Possessing seven grams or more carries criminal penalties in Russia. Those can include up to two years of “corrective labor.” Yet Griner was charged with smuggling cannabis into Russia, which holds a prison sentence of five to 10 years. Griner was sentenced to nine years.

In order to obtain Griner’s release, President Joe Biden authorized Bout to be released from prison and returned him to Russia. Bout will escape 25 years of federal prison time. Bout has served just half the time in prison he received in 2011.

Since Thursday the prisoner swap had reportedly been negotiated.

Rumored as a potential prisoner worth exchanging in August, critics of the deal said Bout should remain behind bars because he is one of the most dangerous criminals in the world: Breitbart News reported on Bout’s history:

Nicknamed the “’of Death,’ Bout is a flamboyant arms dealer in his mid-50s with Russian military training. He became a billionaire by raiding the armories of the collapsing Soviet Union in the early 90s and using old Soviet cargo planes to transport his black-market weapons to conflict zones around the world.

Bout’s criminal genius has been hailed by every international law enforcement agency that went after him. He was smart enough to mix his weapons shipments with more legitimate cargoes, posturing as a humanitarian who just wanted to sell cheap food to starving Africans. Meanwhile, he was selling guns to every bad actor from al-Qaeda and Hezbollah, to both the Taliban and its enemies in Afghanistan.

Bout was bagged in Thailand in 2008 while trying to sell weapons to Colombian terrorists who were actually CIA agents in disguise. He was not just selling his murderous Revolutionary Armed Forces of Colombia (FARC) customers a few pistols — the deal included “800 surface-to-air missiles (SAMs), 30,000 AK-47 firearms, 10 million rounds of ammunition, five tons of C-4 plastic explosives, ‘ultralight’ airplanes outfitted with grenade launchers and unmanned aerial vehicles.’

The prisoner swap notably left behind Paul Whelan, an American and former Marine jailed in Russia for nearly two years under “espionage” charges in 2018. Whelan’s total sentence is 16 years. 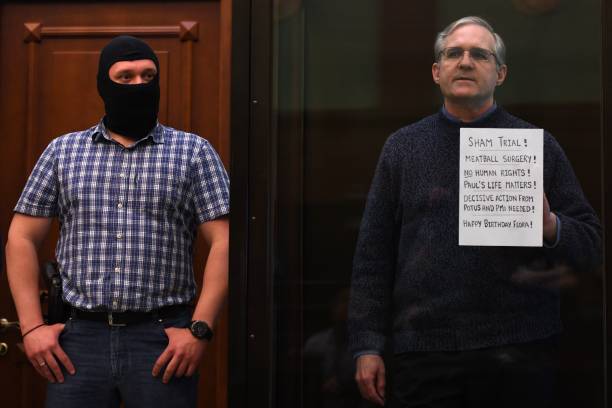 Paul Whelan, a former US marine accused of espionage and arrested in Russia in December 2018, stands inside a defendants’ cage as he waits to hear his verdict in Moscow on June 15, 2020. (KIRILL KUDRYAVTSEV/AFP via Getty Images)

Critics have slammed the Biden administration for allowing an American veteran to remain imprisoned in Russia while a famous basketball star was freed in the prisoner swap.

When CBS News asked Secretary of State Antony Blinken on Sunday if U.S. negotiators were “actively engaged” in swapping for both Whelan and Griner, Blinken brushed off the possibility but stated he was still trying to bring Griner home.

“The other side gets a vote in this. It’s not just what we want. It’s what they’re prepared to do,” Blinken said. “One way or another, one day or another, we’re going to see that through,” he added about Whelan.