Capitol Hill Has Two Opposing Militia, One Of Which Is Linked To An ICE Car Bomb 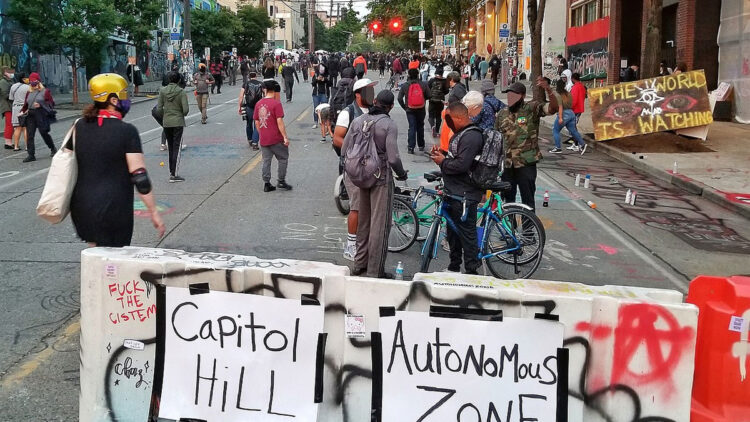 Seattle’s Capitol Hill Autonomous Zone (CHAZ), which apparently left the United States a week ago, and which has since issued demands for the City of Seattle, now has two opposing militia policing its six-block wide border.

One militia is run by Raz Simone, the self-confessed leader of the People’s Force, and the other is a well-armed group operating like the secret service, using cars with no number plates and in-ear communication. They are allegedly known as the John Brown Gun Club.

The Daily Caller’s Shelby Talcott told Fox News: “A lot of these protesters do not agree with Raz becoming this warlord, We spoke to a few of them that were manning the entry points here in Seattle, and they say that his idea of what he wants CHAZ to become is not what the majority of the people inside want. So it is a little bit difficult because they want no rules, but this is a society used to living by rules.”

CHAZ is literally a week old and it already has growing factions. The only question is whether it will end with a democratic solution or violence? After all, it was violence and the threat of arson which led to the zones creation initially.

CHECK OUT: Gov. Inslee and Mayor Durkan continue to support and protect the Capitol Hill Autonomous Zone (CHAZ). Somehow, it is all President Trump’s fault.

Kim Kelly, who is a self-confessed journalist, organizer, anarchist, and troublemaker wrote on Twitter: “Seattle’s CHAZ is being protected by armed community patrols who guard the zone’s makeshift borders and act as a deterrent for the white supremacists sending threats.”

That is the left’s viewpoint.

Yet, calling armed militia ‘community patrols’ and saying that they’re defending against white supremacists is ignoring the facts. These are anarchists-come-terrorists, who are unlawfully policing an area of Seattle, deciding who and what CHAZ should be for its residents and businesses.

The danger is that the left has set a precedent for any social or political agenda to follow suit. Even ones with a history of violence.

John Posobiec, a reporter for One America News Network (OANN) wrote that: “Pro-Antifa media are now running puff pieces for the John Brown Gun Club, the Antifa group that is patrolling CapHill armed with rifles and handguns. One of their members firebombed an ICE facility last year.”

Whichever militia wins out, the political agenda inside CHAZ is clear. Anything that doesn’t fit the left anarchist narrative is not allowed. Considering the New York Times keeps calling it a free speech zone, it’s ironic that only liberal and Democrat voices seem permitted.

Capitol Hill’s Not A Free Zone

The Daily Caller’s Shelby Talcott also revealed that at least one resident in CHAZ was fearful and angry. They said: “We don’t have the right to vote for stuff here anymore.”

They continued: “You can see the demands when they say that we want the pensions away from every police officer in Seattle. They took our rights away. That’s not okay. It’s not political. It’s just not okay.”

Talcott added: “He was just incredibly upset. He is terrified. He was telling us how these protesters are banging on the front of his gates at night, and he hears shots being fired throughout the evening,” and “it is interesting, because this is a residential area that they have taken over, and not everyone is on board.”

What people in Washington State, the City of Seattle, and the rest of the United States need to realize is that this is happening under a Democrat Mayor and a Democrat Governor. Both of whom are giving anarchists the freedom to do as they please. So ask yourself, is Capitol Hill the America you want?