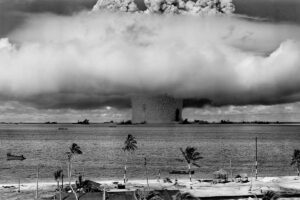 While President Trump and President Vladimir Putin spoke about arms control, a Communist Chinese Party newspaper turned potential peace into a call-to-arms by writing it was urgent that China expanded its nuclear arsenal.

On May 7, during the White House phone call, President Trump and Putin discussed several issues. Including, how America was ready to help Russia fight COVID-19, the global oil market, and arms control between the two nations plus China.

The White House said: “President Trump reaffirmed that the United States is committed to effective arms control that includes not only Russia, but also China, and looks forward to future discussions to avoid a costly arms race.”

The day after, there seemed to be a reaction.

While President Trump talked about arms control, the People’s Daily, the official newspaper of the Communist Party of China decided to ramp up hostility with an article from the Global Times editor-in-chief, Hu Xijin.

Hu Xijin wrote: “It’s an urgent task for China to expand its nuclear arsenal and strengthen its strategic strike capacities.”

It doesn’t matter the context surrounding that statement, it’s a nuclear call-to-action that every nation should be concerned by.

Xijin starts his article by putting the blame squarely at the feet of America, they wrote: “US House Minority Leader Kevin McCarthy announced on Thursday the establishment of a Republican-led “China task force” aimed at dealing with a perceived geopolitical threat from Beijing.”

So while the United States sets up a team to investigate China’s actions, Xijin’s article calling for a bigger nuclear arsenal gets circulated by the CCP’s biggest newspaper group.

The article also took aim at the United States trying to stop China’s progress. This was likely the reaction to the arms control phone call with Putin.

Without irony, in a Weibo post, which is China’s version of Twitter, Xijin wrote: “We love peace and promise not to use nuclear weapons first, but we need a bigger nuclear arsenal to suppress U.S. strategic ambition and impulse against China.”

CHECK OUT: Another Democrat says Biden allegations put to rest because of TV denial. Doesn’t anyone remember Bill Clinton?

Minority Leader Kevin McCarthy said: “The Communist Party of China hid the seriousness of this disease, led a propaganda campaign blaming the U.S., used their supplies to exert influence and continue to refuse international experts to investigate what happened.”

If China has nothing to hide, they should let investigators in. It happens every day to their citizens.

Yet, this article goes beyond just international issues.

Xijin also wrote: “Increasing hostility toward China and blaming China for the Trump administration’s botched response to the coronavirus epidemic have become the core campaign strategy of the Republican Party. No Democrats have participated in the task force.”

Somehow Xijin takes a national argument and makes it pro-Democrat. It makes that Tucker Carlson name-dropping video all the more relevant.

CHECK OUT: According to one poll, Americans don’t want to reopen gun stores.