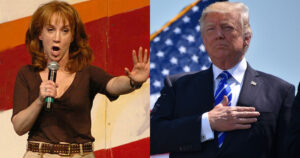 While Democrats challenge every word that comes out of President Trump’s mouth, the left’s celebrity army literally gets away with saying anything. Even advocating killing the President.

The latest sick celebrity to step up and make such comments is Kathy Griffin, a 2007 and 2008 Primetime Emmy award-winner.

On May 26, Kathy Griffin tweeted: “Syringe with nothing but air inside it would do the trick,” followed by “*** Trump,” all in capitals.

To confirm, Griffin’s suggestion of injecting air would probably result in a fatal blood vessel blockage in the circulatory system.

Griffin’s reaction was in response to CNN’s Jim Acosta, who tweeted about the President’s announcement regarding seniors having their insulin prescriptions capped at $35 a month. During the announcement, the President joked about taking insulin, saying: “I don’t use insulin, should I be? Huh?”

Jim Acosta tweeted: “Trump at diabetes event at WH: I don’t use insulin. Should I be?”

Clearly the idea of President Trump and a syringe was too much for Kathy Griffin to handle, triggering her into advocating for President Trump’s death.

Doubling Down On President Trump

As media got a hold of the story and started to tweet in response to Kathy Griffin’s reaction, the Washington Examiner questioned whether she had in-fact advocated for someone to stab President Trump with a syringe full of air.

Kathy Griffin again responded on Twitter: “I sure did, ******,” and underneath she added the hashtag: #TrumpLiedPeopleDied.

Just in case Kathy Griffin takes down the admission we’ve attached a screenshot below.

According to United States law, threatening the President is a federal felony, Code Title 18, Section 871. The offense is punishable with a $250,000 maximum fine, five years in prison, followed by three years of supervised release.

Yet we all know nothing will come of it, and a Kathy Griffin apology is pointless.

This isn’t the first time Kathy Griffin has tweeted about President Trump being killed. In 2017 she posted an image of herself with what looked like the bloody head of President Trump.

The President responded to it back in 2017 saying: “Kathy Griffin should be ashamed of herself. My children, especially my 11-year-old son, Barron, are having a hard time with this. Sick!”

Griffin later apologized, saying: “I went too far. I made a mistake, and I was wrong.” She was then fired from CNN but that wasn’t the end of the story.

In 2018, on The View, she took back the apology and went even further, calling President Trump’s eldest sons, Donald Jr. and Eric “Eddie Munster and date rape.”

This clearly proves another apology would be pointless.

On Twitter, many people have retweeted what Kathy Griffin said to the Secret Service, to the President, and everyone else who is in a position of authority to act. Many of those taking action believe it to be a direct threat to the President of the United States.

We however believe it’s just another twisted celebrity living in a fact-free bubble getting away with promoting murder.