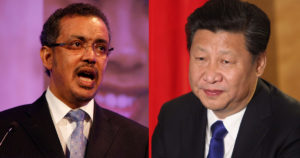 President Trump cut off funding for the World Health Organization (W.H.O), but it won’t make a difference because China has donated more in the last two months than they have paid in fees since 2018.

In China’s previous assessment of the W.H.O, they paid the World Health Organization around $38-million for two-years service.

To clarify, the W.H.O defines an assessment on their website as: “Assessed contributions are the dues countries pay in order to be a member of the Organization. The amount each Member State must pay is calculated relative to the country’s wealth and population.”

April 23, the Chinese Ministry of Foreign Affairs announced that China will donate $30-million to the World Health Organization to support its fight against COVID-19. A spokesperson later tweeted: “At this crucial moment, supporting WHO is supporting Multilateralism and Global Solidarity.”

This $30-million is addition to the $20-million donated March 11. That’s a total of $50-million in less than two months.

CHECK OUT: Joe Biden is under investigation for sexual assault and the mainstream media isn’t even hiding its double standards.

During the announcement, a second Chinese Foreign Ministry spokesperson said: “Since the outbreak of the new coronavirus, WHO, under the leadership of Director General Ghebreyesus, has actively fulfilled its responsibilities and upholds an objective, fair and scientific standpoint.”

Some of the praise includes: “Beijing had set a new standard for outbreak control,” “bought the world time, even though those steps have come at greater cost to China itself,” and even singled out China’s “transparency,” calling its response “impressive.”

It’s not just the Director-General that’s praising China. Leading W.H.O physician Bruce Aylward said: “if I had COVID-19, I would want to be treated in China.”

It is that level of commentary which is making many question the W.H.O’s relationship with China. Especially when reports have come out saying that if China acted when they first knew about COVID-19’s seriousness, 95% fewer people around the world would have died.

Whether it’s mutual respect or something more nefarious, there are so many questions regarding China’s handling of the virus that all the donations and propaganda in the world won’t stop people demanding an international investigation.

CHECK OUT: China’s Communist Party is outraged that others are joining in with the President and want an international investigation.

May 2017, when the World Health Organization (W.H.O) was looking to elect a new Director-General, Dr. Tedros Adhanom Ghebreyesus was backed by China and won.

Three years later and best buddies, China’s Communist Party and Director-General Tedros Adhanom Ghebreyesus are throwing praise at each other, and money, as the world reels from a pandemic which likely originated in China despite their propaganda machine pushing blame elsewhere.

Sadly for the world, China’s reach isn’t limited to the World Health Organization.

In a monologue from his show, Tucker Carlson said: “Chinese officials have tried to squelch all conversations about who’s responsible for this pandemic by inflaming the political sensitivities and race guilt of American elites.”

During the same monologue, Carlson said: “According to an informed U.S. government official, quote: “Beijing has instructed diplomats in their consulate in San Francisco to work with American state and local officials, and members of Congress, to push back against anyone who gets too far out on blaming China for this (pandemic).”

If China does have so much control, the rest of the world will have to come together if we want to get justice.