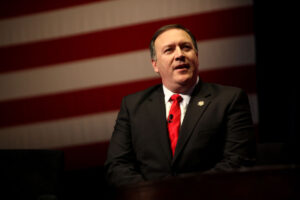 The Secretary of State has somehow made China threaten America simply by congratulating the re-elected President of Taiwan, Dr. Tsai Ing-wen.

After months of back-and-forth between government officials and China regarding the coronavirus origin, it was one tweet from Mike Pompeo that pushed China over the edge and literally threaten the United States.

Pompeo tweeted: “Congratulations to Dr. Tsai Ing-wen on the commencement of your second-term as Taiwan’s President. Taiwan’s vibrant democracy is an inspiration to the region and the world. With President Tsai at the helm, our partnership with Taiwan will continue to flourish.”

CHECK OUT: President Trump slams W.H.O in letter calling out their complicity in China’s COVID-19 recklessness.

On the surface, it’s a simple, positive tweet. The issue, China hates Taiwan’s current President and doesn’t even recognize it as an independent country.

The friction between Taiwan’s President and China is so great that the tweet from Pompeo pushed a Foreign Ministry spokesperson for China to say: “On Pompeo’s congratulation to Tsai Ing-wen on her inauguration, we express strong indignation and condemnation. China will take necessary counter-measures, and the consequences will be borne by the US side.”

The big question is, what does “China will take necessary counter-measures, and the consequences will be borne by the US side” actually mean?

One thing is certain, it is definitely a threat.

In January 2019, President Dr. Tsai Ing-wen said that China and Taiwan would operate under a framework of one country, two systems. A framework that the Chinese Communist Party (CCP) finds unacceptable.

This framework changed the understanding of the 1992 agreement between China’s CCP government and Taiwan’s previous ruling party, Kuomintang (KMT). The 1992 agreement stated that Taiwan belonged to China but that there could be differing interpretations of that rule.

The 2019 framework put in place by the re-elected President Dr. Tsai Ing-wen, is a variation of the rule that the CCP doesn’t like.

The bigger issue for China is that the current President is part of a movement in Taiwan which may eventually lead to the country becoming fully independent of China.