Chuck Schumer: ‘No Democrats Will Object’ in the Senate to $2,000 Stimulus Checks 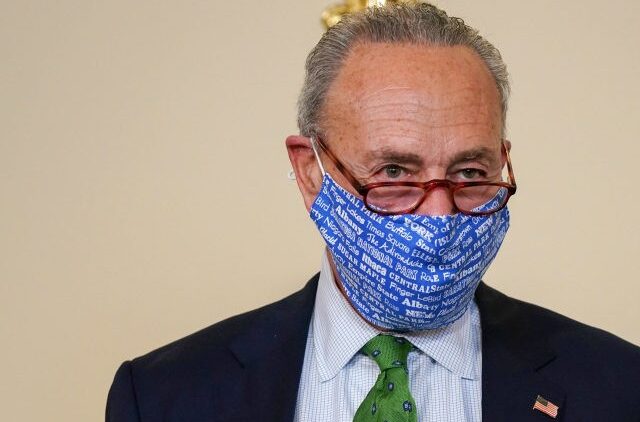 “The House will pass a bill to give Americans $2,000 checks. Then I will move to pass it in the Senate. No Democrats will object. Will Senate Republicans?” Schumer asked late Sunday:

Calling the relief legislation a “down payment on what is needed to crush the virus,” House Speaker Nancy Pelosi (D-CA) lauded Trump’s decision to sign the bill but called on Trump to “immediately call on Congressional Republicans to end their obstruction and to join him and Democrats in support of our stand-alone legislation to increase direct payment checks to $2,000,” which she said would be brought to the House floor on Monday:

Trump made the announcement Sunday evening, signing the legislation to avoid a government shutdown and restore unemployment benefits to the American people.

However, he emphasized he is signing the bill with what he referred to as a “strong message that makes clear to Congress that wasteful items need to be removed.”

Breitbart News detailed several of these items, many of which have nothing to do with coronavirus aid, including billions in foreign aid and perks for special interests.

“I will send back to Congress a redlined version, item by item, accompanied by the formal rescission request to Congress insisting that those funds be removed from the bill,” Trump said in a statement, explaining that he is signing the bill to restore unemployment benefits, halt evictions, add PPP, and assist with the distribution of the vaccine.

“On Monday the House will vote to increase payments to individuals from $600 to $2,000. Therefore, a family of four would receive $5,200,” he continued, adding that he expects Congress to review Section 230, which “so unfairly benefits Big Tech at the expense of the American people.”