Church Pleads For Help And Protection Against City Mayor 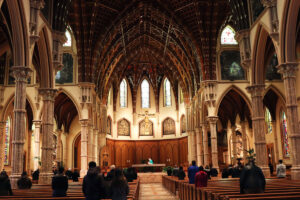 Rev. Courtney Lewis has written a letter to U.S. Attorney John Lausch pleading for help and protection against a city Mayor who has been relentless in her attempts to stop services

Rev. Lewis, the pastor of Cornerstone Baptist Church in Chicago wrote in his letter: “Mayor Lightfoot today sent armed police officers to our small church (45 attendees today) to shut our services down today. They came with 3 squad cars two unmarked Durango’s and a Mayor representative’s car. Like the Soviet styled KGB they knocked on our locked doors; the only thing she hasn’t done “yet” is beat the doors down and arrest our members.”

Three squad cars, armed police, two unmarked Durango’s, and a representative of the Mayor sounds like an extreme response to what was a church congregation. Regardless of whether it was meant to be open or not.

During an interview with Todd Starnes, Rev. Lewis said: “The mayor wants to educate everyone into compliance – which means intimidate.”

How this can happen only days after President Trump made a statement declaring houses of worship essential services is ridiculous.

This isn’t the first time Mayor Lori Lightfoot (D) has been in the spotlight when it comes to shutting down churches. She has in fact done this to several others, with her actions being described as mob-like by an attorney representing two churches in a federal lawsuit against the state of Illinois.

In the lawsuit, both Logos Baptist Ministries and the Elim Romanian Pentecostal Church are claiming that Illinois Gov. J.B. Pritzker’s (D) executive order is unconstitutional and unfairly discriminating against churches by restricting the number of people who can worship, while other premises remain open, with more people present and without a restriction.

The second issue, beyond the intimidation of churches, is that there is clear discrimination too.

During the President’s statement regarding places of worship being deemed essential services, he said: “Some governors have deemed liquor stores and abortion clinics as essential but have left out churches and other houses of worship. It’s not right.”

It’s definitely not right, especially when the church is following safety measures.

In the Rev. Lewis’ letter to the U.S. Attorney John Lausch, he writes: “Our church has gone out of its way to follow CDC Guidelines and we have cooperated fully having online services, outdoor services, and practicing all social distancing requirements. We are even taking members temperatures on the way in our church doors.”

Clearly the church is trying, which is more than what can be said for Mayor Lightfoot, who defied the same lockdown order from Gov. Pritzker to get her haircut.

The Mayor said: “I’m the public face of this city and you know, I’m a person who takes personal hygiene very seriously and I felt like I needed to have a haircut. So I got a haircut.”

The Mayor even told people to stay-at-home and not get a haircut before getting her own haircut. It’s ridiculous.