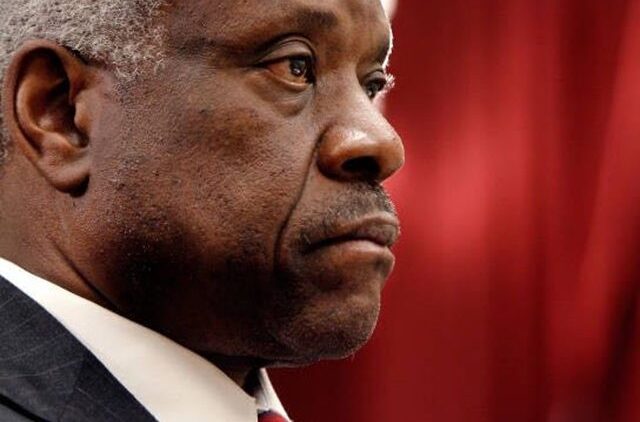 “Our fellow citizens deserve better and expect more of us,” Justice Clarence Thomas declared Monday, when the Supreme Court decided — by one vote –to hear none of the 2020 election cases raising issues of voter fraud and illegal votes.

Justices Brett Kavanaugh and Amy Coney Barrett voted with the liberal justices to deny review of the lower court decisions.

Four justices must vote to hear a case to put it on the Court’s docket, but only three justices — Thomas, fellow conservative Samuel Alito, and libertarian Neil Gorsuch — voted to take at least two of four of the key cases from November 2020.

All three dissenting justices took the unusual step of writing opinions as to why the Court should have taken at minimum two of these cases.

“The Constitution gives to each state legislature authority to determine the ‘Manner’ of federal elections,” began Thomas. “Yet both before and after the 2020 election, nonlegislative officials in various States took it upon themselves to set the rules instead. As a result, we received an unusually high number of petitions and emergency applications contesting those changes. The petitions here present a clear example.”

“The Pennsylvania Legislature established an unambiguous deadline for receiving mail-in ballots: 8 p.m. on election day. Dissatisfied, the Pennsylvania Supreme Court extended that deadline by three days,” Thomas explained, referring to one of the rejected cases. “These cases provide us with an ideal opportunity to address just what authority nonlegislative officials have to set election rules, and to do so well before the next election cycle. The refusal to do so is inexplicable.”

“For more than a century, this Court has recognized that the Constitution operates as a limitation upon the State in respect of any attempt to circumscribe the legislative power to regulate federal elections,” he continued, quoting Supreme Court precedent. “Because the Federal Constitution, not state constitutions, gives state legislatures authority to regulate federal elections, petitioners presented a strong argument that the Pennsylvania Supreme Court’s decision violated the Constitution by overriding the clearly expressed intent of the legislature.”

“But elections enable self-governance only when they include processes that give citizens (including the losing candidates and their supporters) confidence in the fairness of the election,” Thomas added, quoting a recent Supreme Court case that held, “Confidence in the integrity of our electoral processes is essential to the functioning of our participatory democracy.”

“Unclear rules threaten to undermine this system. They sow confusion and ultimately dampen confidence in the integrity and fairness of elections,” he explained. “To prevent confusion, we have thus repeatedly — although not as consistently as we should — blocked rule changes made by courts close to an election.”

The mail-deadline case did not impact enough votes to change the 2020 election. “But we may not be so lucky in the future,” Thomas warned. “Indeed, a separate decision by the Pennsylvania Supreme Court may have already altered an election result.”

That is not a prescription for confidence. Changing the rules in the middle of the game is bad enough. Such rule changes by officials who may lack authority to do so is even worse. When those changes alter election results, they can severely damage the electoral system on which our self-governance so heavily depends. If state officials have the authority they have claimed, we need to make it clear. If not, we need to put an end to this practice now before the consequences become catastrophic.

“At first blush, it may seem reasonable to address this question when it next arises,” he aknowledged. “But whatever force that argument has in other contexts, it fails in the context of elections.”

“For factually complex cases, compressing discovery, testimony, and appeals into this timeline is virtually impossible,” Thomas explained of the five-week window to resolve November presidential election disputes before the Electoral College meets in December, adding “this timeframe imposes especially daunting constraints when combined with the expanded use of mail-in ballots.”

“Voting by mail was traditionally limited to voters who had defined, well-documented reasons to be absent,” he observed, but then noted that while only four percent of Pennsylvania votes were by mail-in ballot last cycle, that the number soared to 38 percent in 2020.

“This expansion impedes postelection judicial review because litigation about mail-in ballots is substantially more complicated,” Thomas continued, quoting expert reports. “For one thing, as election administrators have long agreed, the risk of fraud is vastly more prevalent for mail-in ballots … The reason is simple: Absentee voting replaces the oversight that exists at polling places with something akin to an honor system.”

As a result, one article concluded that, “voting by mail is now common enough and problematic enough that election experts say there have been multiple elections in which no one can say with confidence which candidate was the deserved winner.”

“Because fraud is more prevalent with mail-in ballots, increased use of those ballots raises the likelihood that courts will be asked to adjudicate questions that go to the heart of election confidence,” Thomas reasoned after examining several examples.

“[P]erhaps most significant, postelection litigation sometimes forces courts to make policy decisions that they have no business making,” Thomas added, giving the example that when election officials illegally change rules during an election where some voters have already voted, “courts must choose between potentially disenfranchising a subset of voters and enforcing the election provisions — such as receipt deadlines — that the legislature believes are necessary for election integrity.”

Filing lawsuits after Election Day “is often incapable of testing allegations of systemic maladministration, voter suppression, or fraud that go to the heart of public confidence in election results,” Thomas noted as additional reason to decide these legal issues now. “An incorrect allegation, left to fester without a robust mechanism to test and disprove it, drives honest citizens out of the democratic process and breeds distrust of our government.”

“Because the judicial system is not well suited to address these kinds of questions in the short time period available immediately after an election, we ought to use available cases outside that truncated context to address these admittedly important questions,” Thomas declared. “Here, we have the opportunity to do so almost two years before the next federal election cycle. Our refusal to do so by hearing these cases is befuddling.

“The issue presented is capable of repetition, yet evades review,” Thomas determined, citing the Court’s standard for hearing cases of this nature:

This exception to mootness, which the Court routinely invokes in election cases, “applies where (1) the challenged action is in its duration too short to be fully litigated prior to cessation or expiration, and (2) there is a reasonable expectation that the same complaining party will be subject to the same action again.

“I agree with JUSTICE THOMAS that we should grant review in these cases,” Alito began in a separate dissent, joined by Gorsuch. “They present an important and recurring constitutional question … that has divided the lower courts, and our review at this time would be greatly beneficial.”

Now, the election is over, and there is no reason for refusing to decide the important question that these cases pose. The provisions of the Federal Constitution conferring on state legislatures, not state courts, the authority to make rules governing federal elections would be meaningless if a state court could override the rules adopted by the legislature simply by claiming that a state constitutional provision gave the courts the authority to make whatever rules it thought appropriate for the conduct of a fair election. But a decision would provide invaluable guidance for future elections.

“Conservatives will be very concerned that Justice Barrett did not provide the fourth and final vote to take these cases,” former Ohio Secretary of State Ken Blackwell—who also served on the Presidential Commission on Election Integrity—told Breitbart News in an exclusive reaction to the Supreme Court’s refusal to take any of these cases. “Republicans have long since written off Roberts, and Kavanaugh is giving us a string of disappointments, but this is the first time that Barrett has failed to step up to the plate.”

He echoed Thomas, who concluded his dissent with:

One wonders what this Court waits for. We failed to settle this dispute before the election, and thus provide clear rules. Now we again fail to provide clear rules for future elections. The decision to leave election law hidden beneath a shroud of doubt is baffling. By doing nothing, we invite further confusion and erosion of voter confidence. Our fellow citizens deserve better and expect more of us. I respectfully dissent.