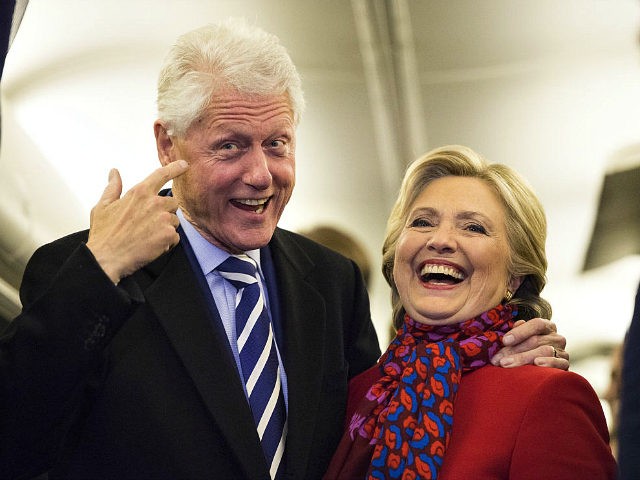 Bill and Hillary Clinton kicked off their 13-city paid speaking tour, “An Evening with the Clintons,” on Tuesday night by accusing President Donald Trump of taking part in a Saudi “cover-up.”

The Clintons — speaking at the Scotiabank ice hockey arena filled with empty seats in Toronto, Canada, Tuesday evening — took the opportunity to bash Trump’s support for Saudi Arabia and accused him of being part of the “cover-up” of Saudi dissident Jamal Khashoggi’s murder.

“We have a president who is the part of the cover-up as to what happened in that consulate or embassy when Mr. Khashoggi was murdered,” she added.

Former President Bill Clinton said the U.S. “compromised” its place in the world under Trump and went on to defend his North American Free Trade Agreement (NAFTA).

Meanwhile, Hillary Clinton continued to take potshots at the president.

“He said today that his gut and his opinion is a lot smarter than peoples’ brains. Literally, you can’t make this stuff up. A dozen times your head is spinning,” she said.

But the Clintons did more than just bash Trump at the Tuesday evening event.

on hot topics and events in the past.

“It seems almost offensive to ask you, but why does Putin hate you so much?” he asked Hillary Clinton. “You seem like a very nice person.”

Toronto was the first stop on the Clintons’ much-hyped 13-city speaking tour for which tickets sold for thousands of dollars on resale sites in many cities.

Officials say the Clintons’ Toronto event sold approximately 3,300 seats in a 19,000-seat venue that fills up when the Toronto Maple Leafs play a major hockey game, although event organizers blocked off seats in the arena’s upper deck.

The tour was billed by promoter Live Nation as a “one-of-a-kind conversation with two individuals who have helped shape our world and had a front seat to some of the most important moments in modern history.”