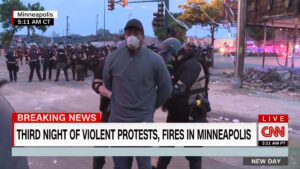 On live television a CNN reporter was arrested by Minnesota state police and escorted away for no clear and obvious reason.

The reporter, Oscar Jimenez, and his crew appear to be fully compliant and respectful of the police and there was no build-up, it just happened without any real cause.

During the video, Jimenez says to the police that he and his crew will move wherever the police want them to.

Oscar Jimenez, who was covering the riots in Minneapolis, identified himself and his crew as journalists and under First Amendment rights had no reason to be arrested unless something happened off-camera in the moments he was not visible.

In the video, you can see and hear no disrespect or aggression from Jimenez or his crew. Watch the video and make up your own mind.

CHECK OUT: Watch MSNBC get caught out in a lie as a passerby says reporter’s camera crew aren’t wearing masks during an on-air segment judging people for not wearing masks.

According to Abby Phillip, a CNN Political Correspondent, another journalist at CNN had also been approached by police and was required to identify himself. The difference is that, once Campbell had identified himself he was left to continue reporting.

Abby Phillip tweeted: “My other colleague Josh Campbell is also on the scene in Minneapolis. He just reported that police approached him, asked him who he was with, he said CNN. And they say “ok, you’re good.” This is minutes after Omar, who is black and Latino, was arrested nearby.”

We cannot confirm or disprove what CNN is reporting and other events may have happened to trigger the arrest, however, at present, the video footage does not give any reasoning as to why Jimenez was arrested.

CHECK OUT: Twitter’s fact-checking against the President already proven wrong.

If it does turn out that the Minnesota state police arrested Oscar Jimenez for no clear and identifiable reason, then the protests, and sadly the riots are likely to escalate. Especially as CNN will use skin color as the reason Jimenez was arrested.

To clarify, if the CNN reporter was arrested because of his skin color, there is no excuse. It’s racist and actions should be taken. However, according to CNN, Jimenez and his crew were arrested.

CNN confirmed this in a tweet: “A CNN reporter & his production team were arrested this morning in Minneapolis for doing their jobs, despite identifying themselves – a clear violation of their First Amendment rights. The authorities in Minnesota, incl. the Governor, must release the 3 CNN employees immediately.”

So despite not seeing it on camera, if more people were arrested, perhaps there was some other incident that is yet to be revealed. Let’s pray that it is something that can be proven so that the riots in Minneapolis don’t escalate.