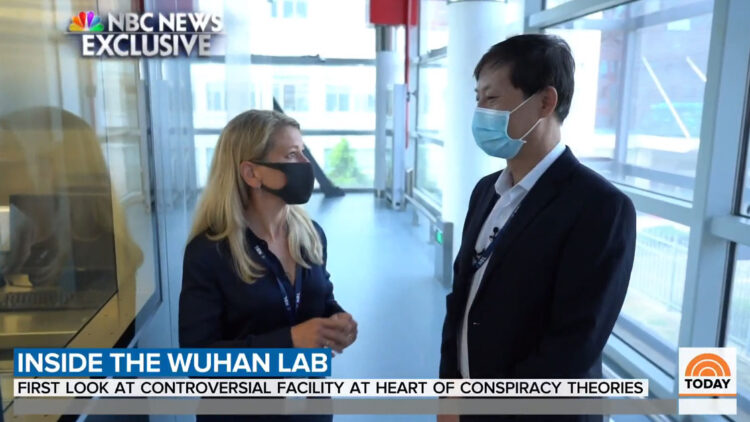 August 10, 2020: NBC News deliver COVID-19 propaganda fresh from China in a one-sided report charting their access to the Wuhan lab where the pandemic allegedly originated.

During a 5-hour visit, reporters summarized how lab technicians were in bubblelike protective suits, sealed behind thick walls of glass, and at no point asked any difficult questions.

Both the report and accompanying video were purely pandering and sympathizing with China.

An example of the one-sided nature of the report includes this quote from Wang Yanyi, the director of the Wuhan Institute of Virology:

“It is unfortunate that we have been targeted as a scapegoat for the origin of the virus. Any person would inevitably feel very angry or misunderstood being subject to unwarranted or malicious accusations while carrying out research and related work in the fight against the virus.”

Wang Yanyi, the director of the Wuhan Institute of Virology – NBC News

If the report got its facts right and asked real questions, perhaps the report wouldn’t have been so clearly COVID-19 propaganda.

The report says that: “The White House has shown no credible proof to back up claims that the coronavirus was either manufactured at or accidentally leaked from the lab, and neither have any other sources.”

Yet there has been a massive list of evidence showing a timeline of how China was complicit with the World Health Organization for manipulating the truth regarding COVID-19 as far back as November 2019.

Plus at no point does the report discredit China’s own propaganda attempts to pass the blame on to Italy, Europe, or the United States.

CHECK OUT: Senator slams China for pushing COVID-19 blame on to the United States.

State Department spokesperson Morgan Ortagus reacted to the NBC News report, asking “…the first independent media access to the Wuhan lab, and what do they have to show for it? They just regurgitated  Chinese Communist Party propaganda and didn’t press for facts.”

She continued: “Did you ask the CCP why they  failed to share info about  the virus, censored their own scientists, and  delayed access by  the international community  seeking answers? We don’t know what happened because the CCP preferred saving face over saving lives.”

Ortagus wasn’t the only person picking apart the NBC News report. The Washington Post ripped into it also.

CHECK OUT: Watch another Joe Biden gaffe as he tries to explain how he’ll deal with China.

Issues with the NBC Report

Washington Post columnist Josh Rogin picked out several issues with the NBC News report. Including these:

Effectively, what should and could have been a hard-hitting expose on the Wuhan Lab ended up as pro-China COVID-19 propaganda.

However, the reality is that, if NBC News wanted to do a hard-hitting report, it is unlikely they would have been given access anyway.

CHECK OUT: World Health Organization chief acts as a propaganda puppet for China’s take over plans.