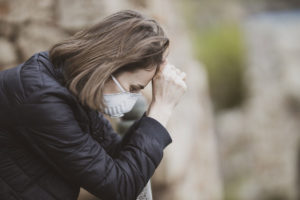 February 29, the U.S. Surgeon General tweets the message “STOP BUYING MASKS.” Stating that they are not effective in protecting the general public.

April 4, the CDC recommend wearing a mask. They even outline what to look for if making your own.

Some believe the government deliberately told American citizens not to protect themselves so that they didn’t hoard the vastly in-demand N95 mask. Honestly, this belief isn’t a massive leap in logic for someone who already dislikes the President.

The 180 degrees flip on masks does make it seem like the government put those on the front-line of this virus, who needed protective masks first. As dubious as that may sound, U.S. stockpiles had been depleted during the H1N1 virus in 2009 and never replenished by President Obama.

It’s a sobering thought but we can’t imagine the government wanted mass infection and deaths. So rather than thinking misinformation conspiracy first, the simplest scenario is that scientists discovered something new about the COVID-19 coronavirus.

CHECK OUT: President Obama depleted the N95 mask stockpile and never replenished it.

An evolving understanding of the virus

The United States implemented social distancing of 6-feet on March 2. Operating under the belief that the coronavirus was like other viruses and that 6-feet was enough. This distance was the norm across Europe.

At that time, the World Health Organization was telling scientists and governments that masks were not recommended for the general public. This answers why the U.S. Surgeon General tweeted “STOP BUYING MASKS.”

March 9, nine days after the U.S Surgeon General’s tweet, the Chinese government’s epidemiologists released a paper countering everything the WHO (World Health Organization) and health authorities had believed up to that point.

The report said: “It can be confirmed that in a closed environment with air-conditioning, the transmission distance of the new coronavirus will exceed the commonly recognized safe distance.”

To be specific, COVID-19 could linger in the air for up to 30-minutes, survive for days on surfaces, and travel 15 feet. This was not the usual virus and would, therefore, need to be investigated thoroughly. After all, who knew if this report from China was accurate?

The Chinese scientists said: “When riding on more closed public transportation such as subways, cars, planes, etc, you should wear a mask all the time, and at the same time, minimize the contact between your hands and public areas, and avoid touching your face before cleaning.”

By this point, the COVID-19 coronavirus had already become a pandemic and many nations had plans set in motion based on their original scientific information.

CHECK OUT: Senator slams China’s propaganda against the United States over COVID-19.

An evolving response to new understandings

In the report, the scientists concluded: “Our knowledge about this virus’s transmission is still limited.”

If China’s understanding is limited after months of dealing with the virus, it should be expected that the rest of the world would be working with evolving information. Simply put, what’s right today might be wrong tomorrow.

Since the report, every nation has had to re-evaluate and reposition from what was said earlier during the pandemic. That includes the United States, who first said you don’t need a mask, but who are now telling you how to make one.

Despite everything, the World Health Organization still doesn’t think everyone needs to wear a mask so it’s no wonder there’s so much misinformation.

Check out the CDC’s video on mask-making below and stay safe.