COVID-19: “Flattening of the curve is due to the most vulnerable dying first,” says senior epidemiologist 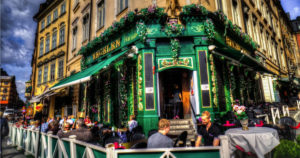 Credit: Pxhere / Sweden open with gatherings of 50 people or less

In a recent interview with UnHerd, one of the world’s most senior epidemiologists, Johan Giesecke pulled no punches.

Giesecke was the first Chief Scientist of the European Centre for Disease Prevention and Control and an advisor to the director-general of the W.H.O.

He is now advising Sweden’s path through the COVID-19 pandemic, and the nation’s strategy has been scrutinized by the mainstream media, desperate for it to fail. A lot like how South Dakota’s Kristi Noem is targeted for her constitution first approach.

Despite Giesecke’s bluntness, his answers have a resounding honesty that shines a light on where the panic began and the reality we’re facing after the lockdown.

The Imperial College model was released March 16 and it said that unless COVID-19 was mitigated by a lockdown, the death toll in the United States would be 2.2 million.

This was the moment everyone upped reactions across Europe and the United States, and Giesecke questions it.

During the interview, he highlights how the college paper re-directed the United Kingdom to u-turn from their herd immunity strategy. A strategy that Sweden’s path remains similar to.

Giesecke states that models are useful for teaching but not for basing policy on. In the interview he says the Imperial Colleges model would take him a day to criticize, pointing out the fact it wasn’t peer-reviewed and that it was never truly released for scientific scrutiny.

According to Giesecke, he doesn’t know of any other model that has made such an impact on the world. Especially one which didn’t factor in the changing capacity of hospitals to tackle a pandemic. This is something every nation facing the crisis has done successfully.

When considering the model’s numbers, the fact it’s a new disease, and that a lot of people are dying, he says the fear of contagion drove policy. Politicians wanted to show strength and that led to draconian decisions rather than evaluating evidence.

Giesecke, in one of the coldest statements about the COVID-19 pandemic, says the flattening of the curve is due to the most vulnerable dying first, as much as the lockdown.

It’s cold, but it makes sense.

Remember, Giesecke is one of the world’s most senior epidemiologists, and he’s adamant that in the end, the numbers between locations that locked down fully, and those who remained open, will balance out based on population and demographics.

When asked about the seriousness of COVID-19, he said it was a mild-disease sweeping across the world. Most people will never know they were infected and it’s likely as much as 50% of a nation’s population would be infected.

He compares the death rate to influenza, which is 0.1%, killing around 2k people in Sweden yearly. In the United States, influenza can kill between 20k and 60k based on the CDC’s numbers, which are estimates only.

Giesecke goes on to make it clear that COVID-19 and influenza are different, pointing out how COVID-19 isn’t spread by children, whereas influenza is. Yet, he states that if influenza popped up now, the world would react similarly despite how people react casually to flu season yearly.

When asked about the lockdown, Giesecke wondered whether anyone thought through how to get out of a draconian lockdown before they were implemented.

He said the exit strategy to lockdown is to pull back one step at a time and then check to see if deaths increase. So the flattening curve is likely to spike again because people who are vulnerable will face the virus at some point regardless.

Towards the end of the interview, he makes it clear that you can only lockdown a democracy for so long. After a few months of having freedoms taken, people will start fighting back. They’ll want to go out. So it will spread regardless and waiting for perfect tests or vaccines is impossible.

He points out that even nations being put on a pedestal for controlling the pandemic can not maintain it. Picking out South Korea as a country that has delayed the spread, rather than stopping it.

To judge success, he says we need to compare numbers this time next year.

Check out the full interview below: