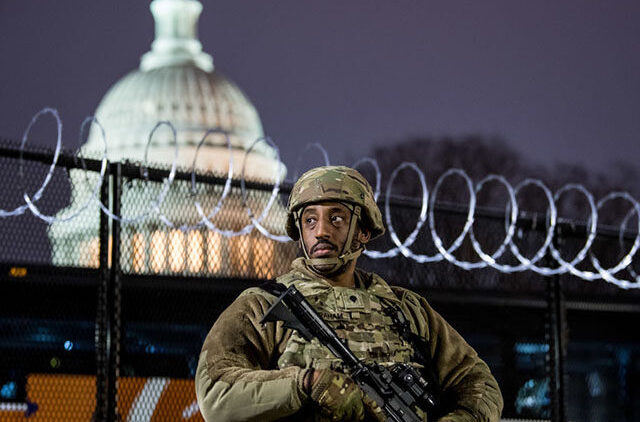 WASHINGTON, DC – JANUARY 15: VA National Guard stands outside the razor wire fencing that surrounds the US Capitol on January 15, 2021 in Washington, DC. After last week’s Capitol Riot the FBI has warned of additional threats against the US Capitol and in all 50 states. According to reports, as many as 25,000 National Guard soldiers will be guarding the city as preparations are made for the inauguration of Joe Biden as the 46th U.S. President. (Photo by Liz Lynch/Getty Images)

Tensions have continued to heighten in the nation’s capital following a year dominated by restrictions and shutdowns stemming from the battle against the Chinese coronavirus, as well as a contentious and disputed presidential election capped off by the January 6 Capitol riots — a series of events all factoring into what will be a rather unconventional inauguration for the incoming president on January 20.

President-elect Joe Biden’s team has continued to downplay expectations for his inauguration — an event typically accompanied by parades, performances, social festivities, and throngs of supporters flocking to the National Mall to witness the peaceful transition of power.

This year’s event, however, will be significantly different, which Biden’s team originally attributed to the ongoing battle against the Chinese coronavirus. Earlier this month, his inaugural committee announced celebrations of the event would include a virtual parade in lieu of the traditional spectacle, although the event will include a look at Biden and Vice President-elect Kamala Harris “making their way to the White House for the first time.”

“There are many grand traditions to the inaugural, and we plan to honor them by highlighting more of our nation’s people than ever before while keeping everyone safe,” Tony Allen, the inaugural committee’s chief executive officer, said while describing what has been dubbed as a “Virtual Parade Across America.”

That will not be the only virtual event, either. While Lady Gaga, an outspoken Biden supporter, is expected to perform the national anthem in person at the inauguration, Biden’s star-studded primetime inauguration special will be virtual, broadcasting across major television networks later that night. The event, hosted by actor Tom Hanks, will feature left-wing celebrities including John Legend, Bruce Springsteen, Jon Bon Jovi, Ant Clemons, Justin Timberlake, the Foo Fighters, and Demi Lovato.

Biden and Harris are expected to deliver remarks at some point during the “Celebrating America” special, but the specific details of their appearance remain unclear.

Perhaps one of the most dramatic changes to this inauguration is the closure of the National Mall, where supporters typically overflow to witness the historic event. While organizers have been encouraging supporters to stay home and watch the inauguration from the safety of their homes because of the Chinese coronavirus, the January 6 Capitol protests continue to have D.C. on edge. The National Park Service (NPS) made the announcement on Friday, noting that the closure took effect at 11 a.m. and will extend through Thursday, January 21.

“The closure has been ordered to ensure safety and security within the area of the National Special Security Event designated by the Department of Homeland Security for the 59th presidential inauguration,” the NPS announced, noting that demonstrations “will be limited in number” and that participants “will be screened prior to entry and escorted to their permitted location.”

“Only those holding permits will be allowed within the closed area,” the NPS added.

That aside, the Washington Monument has temporarily shut down through at least January 24 because of “groups involved in the January 6, 2021 riots” continuing to “threaten to disrupt the 59th presidential inauguration on January 20, 2021,” the NPS announced earlier this week:

Pursuant to 36 CFR § 1.5(a)(1) the National Mall and Memorial Parks is implementing temporary closures of National Park Service public facilities, parking areas and roadways in response to credible threats to visitors and park resources. Groups involved in the January 6, 2021 riots at the US Capitol continue to threaten to disrupt the 59th presidential inauguration on January 20, 2021. This includes the set up and execution of inaugural events, which occur in several park areas. In response, the National Park Service will suspend tours of the Washington Monument beginning January 11, 2021 through January 24, 2021 and may institute temporary closures of public access to roadways, parking areas and restrooms within the National Mall and Memorial Parks if conditions warrant, to protect public safety and park resources. These temporary closures may be extended if the conditions persist. The National Park Service will reopen areas as it determines that the conditions of concern are no longer present.

Other areas already remain closed because of coronavirus-related restrictions, as the NPS pointed out:

Limits on athletic activity and temporary closures to public access to Ford’s Theatre National Historic Site, Belmont-Paul Women’s Equality National Monument, and Old Post Office Tower are already in effect in response to the pandemic, and are described in a separate Record of Determination dated November 23, 2020.

The announcement coincided with an FBI bulletin obtained by ABC News, which noted that “armed protests are being planned at all 50 state capitols from 16 January through at least 20 January, and at the US Capitol from 17 January through 20 January.”

Street closures are dominating the capital, with “much of D.C. closed off like never before,” as described by the Washington Post. D.C. Mayor Muriel Bowser (D), however, said the city is in the midst of “uncharted waters.”

Earlier this week, Bowser extended a pause of “various activities in the District until Friday, Jan. 22, 2021 at 5 a.m.” — two days after the inauguration — while “strongly” encouraging residents and visitors “to be cautious and to limit their exposure to other people so as to limit the spread of COVID-19.”

The announcement included “service adjustments for Metrorail and Metrobus to accommodate the expanded security perimeter that will be in effect for Inauguration beginning Friday, Jan. 15 through Thursday, Jan. 21.” That includes the closure of 13 stations inside the security perimeter.

“We want everybody to enjoy it and enjoy it right in their own states in their own living rooms and with their own families,” Bowser said this week. “We know that this is the right request for our public safety, and our public health.”

“We continue to ask anyone who doesn’t absolutely need to be out and about, or in those restricted areas to avoid them,” she added.

As a result of the restrictions and security concerns, there will be no “post-inauguration luncheon” nor the traditional inaugural ball.

While organizers have been discouraging visitors to the event for weeks, the events that unfolded at the Capitol put the city, and organizers, on greater edge. Officials have erected a “nonscalable fence” around the Capitol ahead of Biden’s inauguration:

Additionally, Washington Metropolitan Police Chief Robert Contee said on Wednesday that people can “expect to see somewhere upwards of beyond 20,000 members of the National Guard” in the area on Inauguration Day.

House Speaker Nancy Pelosi (D-CA) emphasized on Friday that the smaller-scale inauguration is not a sign that officials fear further protests. Rather, the changes are due primarily to public health, she told reporters:

For a long time now, weeks, it has been determined that we would have a very small inauguration because of COVID. That in order to have the distancing and the rest on the platform and then some people down below, it would be necessary to limit it. … [It’s] most disappointing because obviously we’re excited about nominating a new President of the United States, but not at the risk of people’s health and well-being and indeed their lives. So this is always going to be small.

“Now with the insurrection of last week, it is necessitated by security to have more security but hasn’t changed the nature of the swearing-in,” Pelosi continued. “I think it’s important for people to know that.”

“This is not a concession to the terrorists. It is a recognition of the danger of COVID,” she added.

The inauguration will also differ in that President Trump will not attend. While the move is not historically unprecedented, it reflects the continued hostility between the D.C. elites, big tech, Democrats, establishment Republicans, and Trump in the final days of his presidency.

Instead, Trump is expected to depart the White House that morning and hold a farewell event at Joint Base Andrews before departing for Florida, his state of residency, to begin his life post-presidency.