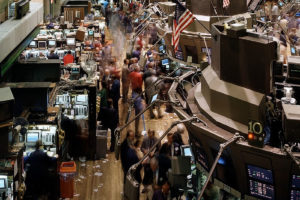 Today on The Daily Rant, I ask was we duped over COVID-19? Yes, it’s a real virus, yes, it is causing fatalities. But with the first predictive models massively overestimating death rates, was that hysteria used politically to push the United States into actions that reset the economic growth President Trump would have run his re-election campaign on? For that and more, listen to the show.

Other topics on the show today:

The NRA slogan “I’ll give you my gun when you pry it from my cold, dead hands” is a popular saying amongst citizens who stand by The Second Amendment. We have a right to bear arms, but when the government said firearm stores weren’t essential we complied.

As a patriot, when the country needs something we do what’s right. So, to curb this COVID-19 pandemic we listened to the experts who have continuously got numbers wrong, went into lockdown, and have followed social distancing rules.

On the government’s request we changed our way of life, instantly. We’ve closed businesses, furloughed staff, stayed in isolation, worn gloves and masks. They said jump, we said how high.

The question is, why do we believe we’d put up more of a fight over the government coming for our Second Amendment rights? For COVID-19 we did as we were told. Only time will tell if it was the right decision.

Dr. Doom Anthony Fauci, who said the United States could see up to 200,000 deaths originally has admitted the actual numbers could be far less.

He said: “I don’t know exactly what the numbers are going to be, but right now it looks like it’s going to be less than the original projection.”

The level of hysteria created by the original estimates was huge. To now have the University of Washington model projecting 60,000 deaths is, of course, positive news. Despite the obvious tragedy that 60,000 people will still potentially lose their lives to this virus.

Here’s the big question, we all believe medical experts regarding our health, yet the President made a decision to extend the social distancing rule at the end of March based on the earlier horrific model.

In a report from Time it reads: “Fauci told CNN’s John Berman that he and White House coronavirus response coordinator Deborah Birx told President Trump in the Oval Office on Sunday that easing off the self-isolation measures early would only allow COVID-19 the space to rebound, killing more people and perhaps hurting the economy too.”

The key point of the report reads: “The change of heart, Fauci said, came when he and Birx presented the President with data showing new estimates that between 100,000 and 200,000 Americans could die from the virus. “He looked at the data and he got it right away,” Fauci said. “He shook his head and said ‘I guess we’ve got to do it.’”

With new models now putting the death total at a similar number to seasonal flu (29,000 to 59,000), will we get a reduced deadline for social distancing?

Not much more needs to be said here, liberal comedian and atheist talk show host Bill Maher was happy for the country to go into a recession if it meant getting rid of President Trump.

The draconian lockdown in the United States, which will destroy businesses, livelihoods, and communities. Plus stimulus packages to help much of the country will ultimately lead to a national financial crisis.

Are you happy now Mr. Maher?