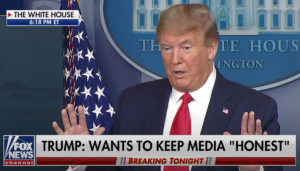 Today on The Daily Rant, I ask, where is the stimulus money? With billions allegedly heading to small businesses and the government pushing for a return to normalcy, what will come first… Checks, bankruptcy, or the re-opening of the nation? For that and more, listen to the show now.

Other headlines on the show:

The mainstream media had one hot-topic for the President’s daily briefing, whether Dr. Fauci was going to be fired? The President hit back against the media in a combative press conference. Watch the President shut them down below:

The clues apparently pointed to such an action, with the President retweeting and thanking One American News Network (OANN) for pointing out fake news. After all, at the bottom of the OANN tweet was the sentence, “Time to #FireFauci.”

The original tweet by OANN was pointing to the interview Dr. Fauci had on Jake Tapper’s CNN show.

The CNN interview that started #FireFauci

On Jake Tapper’s show, Dr. Fauci was asked if more lives could have been saved if actions were taken earlier. Dr. Fauci replied: “I mean, obviously, you could logically say that if you had a process that was ongoing and you started mitigation earlier, you could have saved lives.”

Dr. Fauci continued: “If we had right from the very beginning shut everything down, it may have been a little bit different. But there was a lot of pushback about shutting things down back then.”

This is where Dr. Fauci triggered the mainstream media. He says there was pushback, despite the government following predictive models and advice Dr. Fauci was giving at the time. The tweet by OANN even highlights how Dr. Fauci was telling America not to worry as late as February 29th.

Jake Tapper then asked why the President didn’t put social distancing into effect until mid-March, three weeks after the nation’s top health experts recommended it. The doctor replied: “You know, Jake, as I have said many times, we look at it from a pure health standpoint. We make a recommendation. Often, the recommendation is taken. Sometimes it’s not. But we — it is what it is. We are where we are right now.”

The replied sounded bad for the President.

The social distancing elephant in the room

During a briefing, only one day after the CNN interview, Dr. Fauci said to the nation: “The first and only time that I went in and said we should do mitigation strongly (social distancing), the response (from the President) was, ‘yes, we’ll do it,’”

This one statement should end the Democrats and mainstream media’s constant blaming of the President for not putting social distancing into effect earlier. The President was advised by Dr. Fauci and acted upon his recommendation immediately. So if anyone is to blame, it is Dr. Fauci.

Plus, in the CNN interview, Jake Tapper asked why the President didn’t put social distancing into effect until mid-March, after the nation’s top health experts recommended it. Which experts are those? Especially when Dr. Fauci is considered the nations biggest expert. Who has a higher profile?

White House spokesperson Hogan Gidley stated: “This media chatter is ridiculous – President Trump is not firing Dr. Fauci. The President’s tweet clearly exposed media attempts to maliciously push a falsehood about his China decision in an attempt to rewrite history. It was Democrats and the media who ignored Coronavirus choosing to focus on impeachment instead, and when they finally did comment on the virus it was to attack President Trump for taking the bold decisive action to save American lives by cutting off travel from China and from Europe. Dr. Fauci has been and remains a trusted advisor to President Trump.”

Regardless of what CNN and Dr. Fauci say, this interview will be used as evidence each time Democrats and a biased media blame the President.