Daily Rant: COVID-19 death predictions down from 2-million to 31k — were we duped? 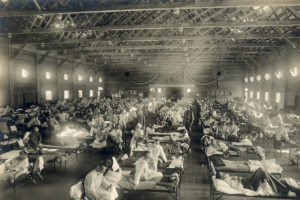 Credit: A hospital in Kansas during the Spanish flu epidemic in 1918 / WikiCommons

Today on The Daily Rant, I ask how the original prediction of 2-million deaths has become 31,000? The power of social distancing… The power of God… Or have the models used to predict this pandemic been used to scare this nation and President into compliance? For that and more, listen to the show.

Other topics on the show today:

COVID-19 numbers compared to the flu

No one is denying that COVID-19 is a serious virus, but the latest model predicting 31,000 to 127,000 deaths puts it at numbers similar to seasonal flu.

What’s surprising is that these numbers are inclusive of flu-vaccines, over-the-counter medications, and doctor-prescribed treatments. Imagine the numbers without such interventions? And yet, the country doesn’t go into lockdown during the 13-week flu season yearly.

Again, to state the obvious, no one is saying COVID-19 isn’t serious. Any virus that takes lives is a national concern. Yet, there’s no doubt something has changed in the United States, from the hysteria to now, where the CDC is loosening its back-to-work guidelines for key workers.

It’s no surprise citizens are asking whether this nation and President were duped by the data. It’s the right question to ask. That, and when can the rest of us get our freedoms back?

Find out more on The Daily Rant with Steve Sanchez – Listen Now.

In Columbus Ohio, nearly 70 protesters, following social distancing rules, made their concerns known in a well mannered and well-timed demonstration.

When asked, the protesters stated they were worried about unemployment and the banning of mass gatherings.

Ohio’s Governor DeWine, who specifically exempted First Amendment demonstrations from the banning of mass gatherings responded positively to the protestors. He said: “I will guarantee you we’re not going to keep these orders on one day longer than we have to,”

With President Trump saying the lockdown will continue to April 30, it’s clear this nation is ready to protest if it lasts a day longer than required. The big question is, can you afford to be on lockdown beyond April 30?

Find out more on The Daily Rant with Steve Sanchez – Listen Now.

A third of America can’t last a month!

According to the Washington Examiner, 34% of citizens in the United States only have enough savings to survive, at most, 1-month without pay. 60% of the nation can only afford 3-months.

It’s a stark realization for a nation and economy literally on lockdown.

What’s even bleaker is that 36% of men, and 35% of women, would sell their blood plasma to make money before selling furniture and game consoles.

It’s clearly time for prayer. Together we can get through this lockdown.