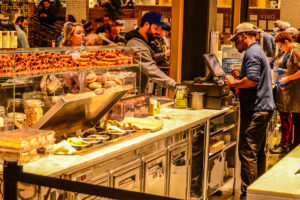 Today on The Daily Rant I ask when will we get back to normal? As the nation bizarrely celebrates tax day because of the stimulus payments being received, I want to know when will this country re-open rather than be paid off? For the full show, listen now.

In the same meeting, Mayor Goodman challenged Gov. Sisolak’s directive to close non-essential businesses during the COVID-19 pandemic. Pointing out that, there was no data to support why the city was shut down, and that there was no plan for coming out of it.

The Mayor even said: “With a population of 3.2 million living in Nevada, those whom we lost represent less than a half of 1% of our population, which has caused us to shutdown the entire state and everything that makes Nevada unique.”

That’s a brave thing to say considering how people get enraged today by cold hard facts.

The Mayor continued: “We cannot live going forward with the medical health industry telling us that this virus is going to be around longer than a month or two, maybe even a year.”

She concluded by asking the Governor to “open the city. Open Clark County. Open the state. For heaven’s sake, being closed is killing us already.”

The restaurant industry will change forever

Esther’s Kitchen in Las Vegas lost $20,000 to food waste within a week of being forced to close.

Since then, the owner James Trees has said “we didn’t see a decline in sales. We just closed. So it was very tough. And that’s $170,000 that walked out the door.”

Celebrity chef Tom Colicchio, who had restaurants in New York, Los Angeles, and Las Vegas, had to go beyond just closing last week. The chef shut down all of his restaurants completely. A decision that has added 300 more people to the unemployment list.

Chef Colicchio isn’t optimistic about the restaurant industry’s future either. He said, “I think if we’re lucky 25 percent of the restaurants will stay open.” That’s 25% of all restaurants in the United States.

The chef continued: “The money that we make today, if we were open, goes to pay bills from 45 days ago. Margins are razor-thin. This is not the business that people think it is.”

The big change will come when restaurants that have been able to survive re-open but need to factor in social distancing and other new rules.

Larry Lynch, the National Restaurant Association’s Senior Vice President for Science and Industry said: “If we’re looking at a six-foot differentiation or 6-foot distance, how’s that going to work?”

More than 80 million people have had their coronavirus stimulus checks deposited directly into their bank accounts this week.

Those who don’t file tax returns but are still eligible will, unfortunately, have to wait a little longer because checks have yet to be mailed.

For those who do file tax returns, if your payment hasn’t arrived, head over to the IRS stimulus check website to track your payment. All you need to do is type your Social Security number and the mailing address of your last tax return and you’ll immediately see the status of your check.