‘Daily Show’ Host Trevor Noah Rips Biden for Shouting Out Dead Congresswoman: ‘No Joe, What Are You Doing?’ 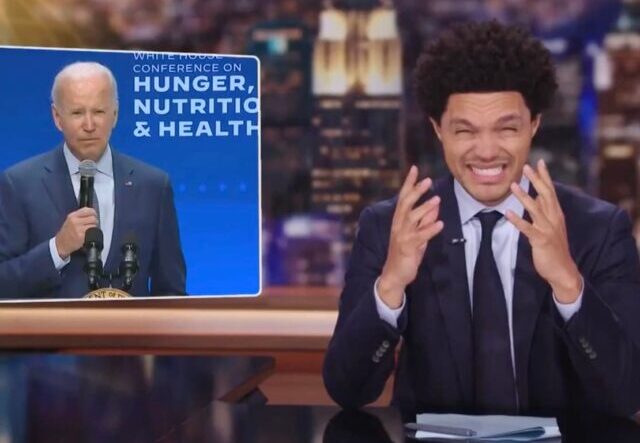 Noah used the moment to caution Biden about just how “awkward” it looked.

“After a shaky start to his presidency, Joe Biden has recently gotten some of his groove back,” Noah began, applauding past legislative and diplomatic wins. “People are saying that Biden might have a really good shot at winning a second term in office. All he has to do, though, is avoid doing stuff like this!”

With that, Noah showed the clip of Biden searching the crowd for Rep. Jackie Walorski (R-IN), who died in a car accident just last month.

“Jackie, are you here? Where’s Jackie?” he asked. “She must not be here,” he continued, as Breitbart News reported at the time.

The response from the White House to Biden’s gaff was no less confusing, with the claim it was “not an unusual scenario” for a president to make public calls seeking a response from a dead person.

During a press conference later in the day, Breitbart News reported White House press secretary Karine Jean-Pierre claimed Biden had Walorski at the “top of mind” and claimed his attempt to find the deceased congresswoman was not “unusual.”

“You all saw, you all watched, which is why you’re asking the question, right? Where he was calling out, again, congressional leaders, a bipartisan leadership that we have seen on this particular issue,” Jean-Pierre said. “And again, he’s going to see her family in just two days, and she was on top of mind.”

“I mean, that is, that is not an unusual scenario there,” Jean-Pierre continued.

“Karine, I have John Lennon top of mind every day but I’m not looking around for him,” one reporter replied.

“When you sign a bill for John Lennon as president then we can have this conversation,” was Jean-Pierre’s retort.

The press secretary then ignored follow-up questions from reporters, including one asking whether Biden would apologize to Walorski’s family.