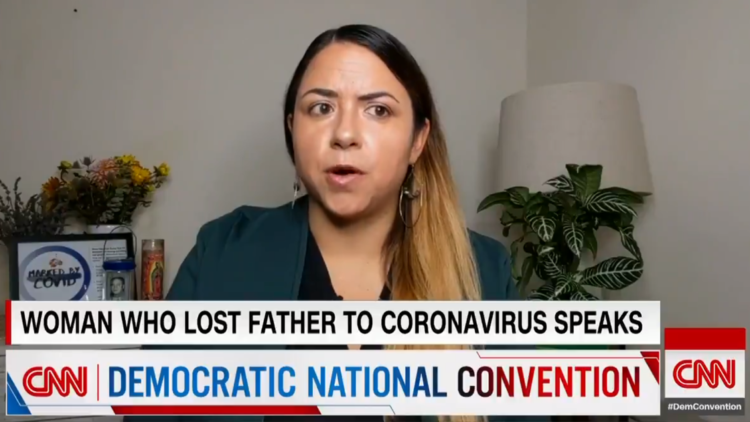 In a straight-to-camera appearance at the DNC, a daughter blames President Trump for the death of her father.

It was a powerful and sad moment, but surely the blame is misdirected?

The President went into lockdown the moment medical experts told him to. He has followed the advice of experts throughout, and state governors have controlled executive orders regarding lockdowns and re-openings.

Yet, he was only following the guidance set by the World Health Organization who ignored the issues, allowing the virus to spread internationally.

CHECK OUT: President Trump slams the World Health Organization in a letter that puts America first.

The daughter, Kristin Urquiza can direct her anger anywhere she wants. Yet, it does make us wonder, why is the anger always directed at the President?

The answer is simple, he’s blamed for everything.

What’s more sinister is that the Democrats gave this grieving person a platform when the reality is cold.

Grown man who decided to go out to a karaoke bar when he could check on case numbers in the city, county, and area to make an informed decision to go out or not. Older person which falls under high risk category. Grown man and daughter is blaming Trump for dad's decision

Kristin Urquiza’s father who caught COVID-19 chose to be at a karaoke bar long after the President put the country into lockdown. Long after all the warnings were in place and daily infections and death counts were ticking across TV screens.

So while the daughter blames President Trump, the blame lies elsewhere.

CHECK OUT: Michigan Democrat thanks President for saving her life from COVID-19.

If you read the following, you can see why the Democrats wanted Kristin Urquiza to speak at their conference.

During her speech, Kristin Urquiza said: “I’m one of the many who has lost a loved one to COVID. My dad, Mark Anthony Urquiza, should be here today, but he isn’t … My dad was a healthy 65-year-old. His only preexisting condition was trusting Donald Trump, and for that, he paid with his life.”

FACT: Older people and overweight people were continuously warned that they were in the high-risk category. That they should isolate and not take risks. Kristin Urquiza’s father was 65 and overweight.

In regards to the karaoke bar, in Arizona, restaurants who followed social distancing rules could reopen June 11. Yet, that rule did not mean if you’re at risk go out and socialize.

Simply put, people were given a choice.

CHECK OUT: Survival rate by age, if you get COVID-19.

The only real questionable action from President Trump during the pandemic was his support of hydroxychloroquine. Yet, even that was backed by the CDC for a while and still is by many frontline doctors.

Kristin Urquiza concluded: “One of the last things that my father said to me was that he felt betrayed by the likes of Donald Trump. And so, when I cast my vote for Joe Biden, I will do it for my dad.”

FACT: Joe Biden was ignoring the coronavirus into March, and later lied about it in church. Not to mention he called the President’s flight restrictions to stop the spread of COVID-19 xenophobic and fear-mongering.

Clearly, the Democrats weren’t bothered about COVID-19 until three-months after the President. It’s ironic how the Democrats don’t broadcast that.

Watch the video below.