Demi Lovato: I Cut My Hair to Free Myself of ‘Gender and Sexuality Norms … Placed On Me as a Christian in the South’ 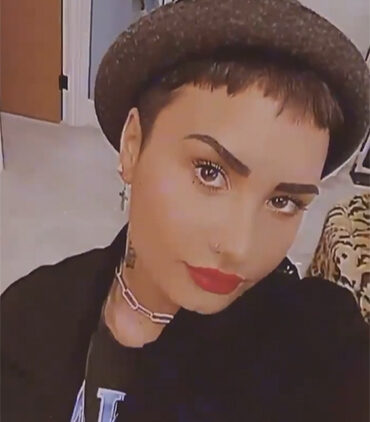 Pop star Demi Lovato, a gun control proponent and left-wing activist who backed Hillary Clinton in 2016, says she cut her hair in order to free herself “of the gender and sexuality norms” she says were placed on her “as a Christian in the South.”

“I’m doing what I need to do for myself, and my wellness, my wellbeing, like, I’m putting myself first in front of my career, and that’s something I never did before, because I was so preoccupied, trying to be the sexy feminine pop star that I just, like, ignored, like, who I am,” Lovato told actress Drew Barrymore in a recent interview on The Drew Barrymore Show. Lovato was responding to Barrymore’s point about the “painstaking measures” to “fall into this cookie cutter silhouette” of a woman in the entertainment industry.

“I cut my hair because I just wanted to free myself of all of the gender and sexuality norms that were placed on me as a, you know, Christian in the South,” Lovato continued.

“And when I cut my hair I felt so liberated, because I wasn’t subscribing to an ideal or a belief placed upon me to be something that I’m not,” the pop star added.

At another point in the interview, Lovato mentioned that there are some things about her life she will never reveal to the public.

Last month, the singer disclosed that she identifies as “pansexual” and a “proud” member of the so-called “Alphabet Mafia” — a pejorative nickname for “queer” and “LGBTQIA+” people.

In January, Lovato called for the impeachment of Donald Trump. Lovato also released an anti-Trump song titled “Commander in Chief,” in which she asks Trump, “do you get off on pain?”