Democrat Calls Out Joe Biden For Racist Past And Politics 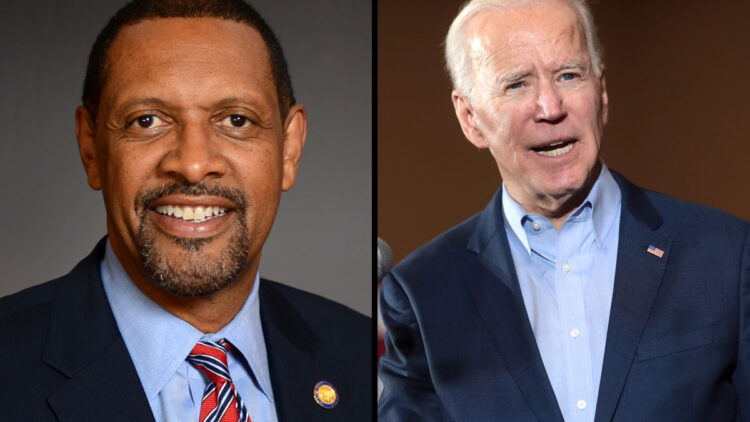 Instead, the statement will be kept out of sight by a leftist run narrative shared amongst the mainstream media. A narrative they even admit to themselves.

In his opening paragraphs, Vernon Jones writes: “I am a lifelong Democrat, but I am also a Black man, the son of a World War II veteran, and a proud American.”

Immediately you know this statement will be patriotic and heartfelt, but it’s also damning of Joe Biden.

CHECK OUT: If only the press would attack Joe Biden like they do President Trump. Yet Biden still makes gaffes in a sterile staged press conference.

Jones wrote: “Unlike other Washington politicians, this president actually backed up his words with actions. He signed an executive order on police reform, taking steps to build a better bridge between law enforcement men and women and their communities.”

The executive order rewards police departments with federal grants for following and meeting equality-based best practice targets. Plus, it aims to create a database that identifies bad cops, while showing accountability across agencies.

Jones continued: “Trump accomplished more in 40 minutes than Joe Biden has in 40 plus years. Where were Biden and the previous administration for eight years in the White House on this issue? I will tell you: they were absent in unifying this country.”

Good question. If systemic racism has been in place for generations, why didn’t former-President Obama and Vice President Joe Biden tackle it in the eight-years they had in office?

Jones ends his statement by writing: “I am black, and I am a Democrat, but, “I ain’t” voting for Biden this November.”

CHECK OUT: The Democrats call to defund the police could be the boost President Trump needs leading up to the 2020 Election.

In a set of statements that should ruin Joe Biden’s campaign, Jones writes: “Where was Biden for 36 years in the U.S. Senate on this issue? I will tell you: he was too busy shouting “my children are going to grow up in a jungle, the jungle being a racial jungle.” That racial jungle he was referring to includes Black and brown Americans like me. Right now, Trump is being defined as a racist by the media, when in reality Joe Biden is the full-blooded bigot.

Do not take my word for it, take then-Senator Joe Biden’s own words for it: “The truth is, every major crime bill since 1976 that’s come out of this Congress, every minor crime bill, has had the name of the Democratic senator from the State of Delaware: Joe Biden.” Now that Biden is running for president in a “woke” Democratic Party in 2020, he is attempting to sweep his racist legacy under the rug. We cannot let him.

Biden is directly responsible for the mass incarceration policies of the 1980s and 1990s, which decimated the Black community. Biden authored the 1994 Crime Bill, which imposed mandatory minimum sentences, disproportionately putting hundreds of thousands of young Black men in prison.”

That should pretty much end it for Joe Biden and the Democrat’s pandering, but that’s not all. Jones had even more to say.

Vernon Jones’s statement went on to compare the success of black Americans under Obama versus Trump, in even more damning statements.

Jones writes: “The Black unemployment rate under former Vice President Biden and the previous administration averaged a horrific 12.8 percent. The number of Black Americans in poverty barely fell during Biden’s administration, going down by just 145,000 over eight years.

By comparison, more than double that number, 350,000 Black Americans, were lifted out of poverty during just the first two years of the Trump administration.

And just when you thought Joe Biden couldn’t take any more punishment, Jones adds: “Biden has betrayed Black Americans throughout his career in Washington, D.C. President Trump has spent his 3.5 years in office fighting to improve the lives of Black Americans.

We cannot be tricked again. Democrats like Biden will conveniently appear in our neighborhoods and pander to us from now until November. Why? Because they only care about Black people during election years.”

The President should get Vernon Jones on his rallies because this statement is knockout blow after knockout blow against Joe Biden and the Democrats.

CHECK OUT: COVID-19 study shows that the fear of protests kept infections down.

Georgia State Representative Vernon Jones, who was the Chief Executive Officer of DeKalb County, Georgia between 2001 and 2009, and who was DeKalb Sherif in 2014, stated that he would vote for President Trump in the 2020 election back in April.

This move resulted in the Democrat party attacking him.

In an April tweet, Jones wrote: “I’ve seen more Democrats attack me for my decision to endorse Donald Trump than ask me why.”

Jones resigned but later chose to see out his term as Georgia’s State Representative. However, he will not be seeking reelection.

Let’s hope all of America can see Vernon Jones’ statement before November 2020.

CHECK OUT: Election 2020, President Trump had a 91-to-95 percent chances of being reelected before the Black Lives Matter protests. Not even the COVID-19 pandemic could have stopped him.